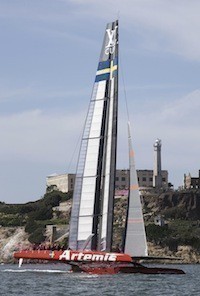 After reassuring a wary public that everything would go ahead as planned despite the tragic death of a British sailor during training last week, the America’s Cup backtracked Thursday and announced that its Review Committee had recommended that teams suspend training on the high-speed catamarans that were designed for the race.

The announcement came just days after statements from race officials who said the event would go on as scheduled.

There has been whispered criticism over the newly designed boats for the 2013 America’s Cup – designs which some believe have pushed the boundaries in balancing safety and speed.

But those whispers are no longer restrained, no longer whispers. Not after the death of British Olympic sailor Andrew Simpson, 36, on 9 May. Simpson was racing with Sweden’s Artemis team. During a training run, Artemis’ boat nose-dived as it was turning downwind, with 17-knot winds throughout San Francisco Bay, according to news report. The nose-dive turned the boat upside down and killed Simpson, who won gold and silver medals for Great Britain during the 2008 and 2010 Olympics. He was believed to have been submerged for 10 minutes.

The Artemis capsizing came after the capsize of the Oracle racing team’s catamaran last fall. The boat ultimately broke apart in the pounding waters. An expert review panel is investigating the two incidents to determine why and how these capsizings happened. They will be unable to overlook whether the new design of the 72-foot lightweight catamarans could be at fault.

However, according to reports, the four teams – Artemis, Oracle, Emirates Team New Zealand and Italy’s Luna Rossa team – met Tuesday to discuss the recent events and how each wanted to proceed. “There was not even a thought given this morning to do anything but continue this race,” Tom Ehman, the vice commodore of the Golden Gate Yacht Club, which is hosting the event, was reported to have said about the meeting. “We have reason to believe all four teams will be continuing.”

After Simpson’s death, however, the German youth sailing team announced that it was withdrawing from the Red Bull Youth America’s Cup. The youth teams race the AC45s, a scaled down version of the AC72s, which were involved in both capsizings.

The announcement and mounting scrutiny is sure to come as unwelcomed news to billionaire Larry Ellison, who has been the mastermind behind this year’s competition. Rules allow the winner of the previous cup to decide where and how the next competition will be held. Ellison’s team, Oracle, won the trophy in 2010 after a lengthy legal battle.

Ellison has been a proponent of high-tech advances in sailing, and ultimately decided upon the AC72s – ultra-lightweight, doubled-hulled vessels with hard wing sails and hydrofoils, allowing them the glide above surface tension at nearly 50 miles per hour.

Until the Review Committee comes back with a decision, the fate of this year’s highly anticipated race appears as precarious as the boats themselves. But no matter what happens, the AC72s and AC45s will be topics of intense debate.