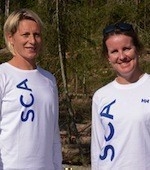 SCA has confirmed that Stacey Jackson (AUS) and Abby Ehler (GBR) have joined their all-female Team SCA crew for the Volvo Ocean Race 2014-15.

For Stacey Jackson, one of Australia's few female boat captains, the call to join Team SCA comes a few months after she was one part of the first selection trials for the all-women’s team.

“I joined Team SCA for the initial delivery sail of the Volvo Open 70 training boat to Lanzarote, Spain.  It was a really interesting experience and gave me a taste of the potential for the team.  We were a group of girls from different disciplines and nationalities, so much of the first week was just getting to know everyone.  But it was a really great session and I am thrilled to be asked to join the team as a confirmed crew,” she comments.

Abby Ehler, from Lymington in Hampshire (UK) was the boat captain on Amer Sports Too, the last all-female entry in the Volvo Ocean Race, and very much feels that her experience in this last race will stand her in good stead for this team. "The huge difference with this campaign is that it is about making the team competitive. The platform that is in place and SCA's commitment towards creating a successful female team is really impressive. There are no excuses, we have all the tools and support to achieve,” she comments.

Global hygiene and forest products company SCA, is due to take delivery of their Volvo Ocean 65 race boat later this month.  The team has secured the second boat in the new One Design Volvo Ocean Race fleet and they will be carrying out sea trials in at the end of this month.

A further four women are currently taking part in the selection program and, once the sea trials are completed in the UK, they will join the selected Team SCA as part of crew sailing the race boat back to the team’s base at Puerto Calero in Lanzarote.