Yachting News » Of Interest » A Fresh Look at Marseille
« BACK

A Fresh Look at Marseille 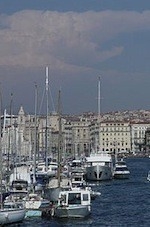 Marseille may be the oldest city in France, but it’s often dismissed as Paris's unruly, and rather less cultivated, little brother. Today, amid a flurry of urban renovation projects, Marseille is shedding this image and reemerging as a dynamic Mediterranean metropolis. Around the historic Vieux-Port, the old center where Phoenician sailors founded the city in 600 BC, the air of renewal is palpable. And it is here that Marseille’s resplendent annual regattas bring the city’s rich past and vibrant present into particular relief this year. “Marseille’s history with sailing is 2600 years old,” says Bernard Amiel, president of Societé Nautique de Marseille (SNM), one of Marseille’s oldest yacht clubs, which today helps organize regattas that draw sailors and spectators from around the world.

Marseille kicks off the summer sailing season June 13-16 with the Les Voiles du Vieux Port, a classic yacht regatta with competitors from far and wide taking part in this colorful race of rare and beautiful old boats. In July, the city once again confirms its reputation as a destination for elite sailing when it hosts both the 2013 J/80 World Championship (July 7-13) and the Tour de France à la Voile (July 26-28). Later in September, Marseille will host the world’s fastest 2-man 49er or ‘dinghy’ teams when the 2013 49er World Championships is held there September 21-29.

For prime regatta viewing, aficionados line the Corniche Kennedy boulevard or get up close on free, city-organized boat launches. “[French writer] Albert Londres said that to enter Marseille from the sea, and arrive in its Vieux-Port, is to truly discover the city,” says Amiel. “And that’s what’s so special about a regatta in Marseille.” Here are five more reasons to come discover an ancient city in the throes of transformation.

Marseille’s longtime cultural deficit is finally being righted in the Euro-Méditerranée district, an immense waterfront renovation project extending west of the Vieux-Port. To walk the newly constructed, vertiginous walkway from the 17th century Fort Saint-Jean over to the latticework encased museum of Mediterranean civilizations, MUCEM, is to literally bridge Marseille’s past and future. Abandoned docks and buildings have been transformed to host establishments like MUCEM, opening June 7, and the Villa Méditerranée—an institution dedicated to cultural and artistic exchange between countries of the Mediterranean which is literally submerged in its subject, with an underwater gallery below and exhibition rooms above stretching out over a jaw-dropping 40m overhang. Visit the Quai d'Arenc Silo, a 1927 industrial grain silo given second life as a 2000-seat concert auditorium, and J1, a functioning dock and 2,500m2 exhibition space. The current show at J1, Mediterraneans, is a fascinating exploration of the history and people of 11 Mediterranean port cities.

Decades after its abandonment, Marseille’s Hôtel-Dieu—a beautiful 18th century former hospital dominating the Vieux-Port, long loved by locals even when it was taken over by squatters—has finally come back to life this year as the city’s most luxurious hotel. The InterContinental Marseille-Hôtel-Dieu boasts majestic staircases, 194 luxurious rooms, pool and spa, a fine dining restaurant and a a 160-seat outdoor terrace with a striking view of the port and cliff-top chapel Notre Dame de la Garde. Once a city of subpar hotel offerings, Marseille’s InterContinental follows openings like Au Vieux Panier, an old grocer’s shop converted into an artsy boutique hotel, and the chic, Philippe Starck-designed Mama Shelter Marseille.

To staff their kitchens, InterContinental primarily drew from a deep pool of local talent, notably giving popular Marseille chef Lionel Lévy the top job. It was Lévy and fellow chef Gérald Passédat who last year co-founded the association Gourmediterranée, which rallies a growing number of Marseille chefs seeking to break out and create a nouvelle Mediterranean cuisine. From Passédat of the three Michelin-star Le Petit Nice to Fabien Rugi with his tiny fishmonger/restaurant, LaBoîte à sardine, these chefs refuse to limit themselves to the same old sacrosanct dishes of bouillabaisse fish stew and ratatouille, and now freely draw inspiration from cuisines and produce from across the region. “Marseille is a true port city, a place of multiple exchanges and cultures that have left their mark in the culinary culture,” declares chef Pierre Giannetti of the hot new Vieux-Port bistro Le Grain de Sel (+33 4 91 54 47 30), an exemplar of the new breed. “In my cuisine I can play with products from across the Mediterranean—yes olives, but also lemon confit, North African spices, products from Sardinia, Sicily and the Balearic Islands.” The result is an array of rich dishes like Sardinian gnocchi with clams and Basque chorizo, Monkfish with Black Olive Sauce, or Iberian pork fillet with red pepper puree and lemon-infused polenta.

Marseille may be a true port city, but for lack of a promenade, it’s never been possible to take in the sights along the historic waterfront without risking getting run over. But this year, the City gave its Vieux-Port a facelift, pedestrianizing several traffic lanes and creating a shining new sandstone esplanade, finally offering their citizens and tourists a chance for a leisurely stroll around their old port. And just as important, says residents like Amiel of SNM, is what hasn’t changed. The renovated Quai des Belges is still transformed daily into a picturesque fish market. And you still see lovely, century-old yachts next to humble Mediterranean fishing boats—the wooden barquettes Marseillaises—that often have belonged to the same families for generations. “There are many Marseillais without great means who nonetheless still have their little piece of water in the family, and can go take their boat out for a ride on Sunday, or meet up with friends to talk soccer and politics,” says Amiel. “It’s a bit like a village here, but that’s the old port of Marseille. If we were to make a port like Antibes, they would bring in the luxury yachts and sweep all that life aside.”

A morning fish market visit and walk around the port is requisite for any visitor to Marseille. And in warm weather months, finish the day with a bus ride up to the gardens of the Palais du Pharo for a light meal at the small outdoor restaurant there, Le Chalet (+33 4 91 52 80 11), and its 180º panorama overlooking the port—an ideal place to watch the spectacle of the sun setting over France’s oldest city.

The 20 km stretching southeast from Marseille to Cassis is some of the most breathtaking coastline in the world, often referred to as the Fjords of France. The waters and land host a rich yet fragile ecosystem, and last year were finally granted protected status as the Calanques National Park, making them more than ever worth the visit—on land or by boat. Icard Maritime offers waterborne tours leaving the Vieux-Port, which pull into several of these beautiful inlets. Weather permitting, reserve a tour that offers the chance to take a swim in emerald waters surrounded by dramatic limestone cliffs. Or try Levantin Catamarans, which offers maxi-Catamaran tours up to Calanque de Morgiret, and includes a fresh seafood lunch.

By foot, a 28 km long trail, the so-called GR51-GR98, traverses all the calanques from Marseille to Cassis, promising magnificent scenery and steep, challenging hiking. Shorter excursions to several calanques are possible, though, beginning on the outskirts of Marseille. In about an hour, one can walk from the parking lot near the Baumettes prison to the Morgiou calanque, or from the Luminy University complex to the Sugiton calanque, with its pebble beach and torpedo shaped island—a delight in the spring and early summer when the wild flowers bloom and a breeze blows off the Mediterranean.

Photo of Marseille by Niels1974, via Wikimedia Commons.