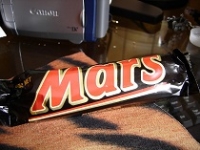 The days of hungry Volvo Ocean Race sailors trading chocolate snack bars at $100 a time are over thanks to the new one-design Volvo Ocean 65 boat.

While some focused on their watch tactics or other strategies on the eve of the opening Alicante in-port race, skipper Bouwe Bekking (NED/Team Brunel), told a news conference today that he’s looking forward to at least eating properly on the nine-month offshore marathon which kicks off on October 11.

“There was a time when sailors could lose around 10kg in weight on every leg, but these days all the crews can take 550 kilos on board – all the boats are the same – so we don’t need to ration any more on the food,” said the Dutchman.

He laughed when a questioner suggested that Mars Bars had once changed hands for $100 to stave off the hunger pangs of ravenous sailors halfway through long legs – but didn’t deny it.

In the past, each crew has tried to save grams of precious weight with boats of different designs taking part. Some sailors even cut their toothbrushes in half to stay as light as possible.

However, since the event has moved to a one-design-fits-all rule for this edition and for 2017-18, such machinations are no longer necessary.

All seven skippers were in relaxed, jokey but determined mood as they prepared for the opening skirmishes of the 12th edition of sailing’s toughest crewed race with the in-port race, taking place exactly a week before the first leg start from Alicante to Cape Town (6,487 nautical miles).

Tomorrow’s event counts towards a separate in-port series competition rather than the main Volvo Ocean Race trophy, although the finishing positions will act as a tie-breaker should teams finish level on points in the event proper.

Both admitted that only overall victory will be enough for them in a race that features a part-Chinese rookie crew, Dongfeng Race Team, and the all-female Team SCA who confess that they’re still also on a learning curve at this level.

“I want to promote our host port of Abu Dhabi as a fantastic destination,” said Walker. “And the best way to do that is by winning.”

Abu Dhabi were the second team to announce their challenge after Team SCA, so they have had plenty of time to acclimatise to the new Volvo Ocean 65.

Team SCA skipper Sam Davies (GBR), meanwhile, has an important mission for her crew after they launched the first all-women campaign in the race for more than 10 years back in 2012.