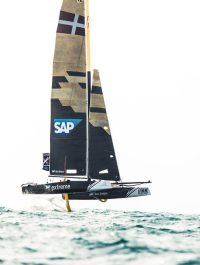 For the first time in its 10-year history the Extreme Sailing Series™ is set to go foiling as the 2016 season kicks off in Muscat in less than one week’s time.

Eight teams of the world’s finest sailors, from 14 different nations, return to the stunning Almouj Golf Course in the heat of Oman from the 16-19 March for four days of intense battle.

The new season marks not just the introduction of super-fast foiling on GC32 catamarans, but also innovations in race format including a new coastal race and match racing, that complement the core proposition of the Series, its unique Stadium Racing format.

On the 16 March the boats will race in front of the stunning historic backdrop of the Old Town in Muscat before returning, in a 20km coastal race, to Almouj, in the first race of this duration in Extreme Sailing Series history. “2016 is a landmark year for us and Muscat marks the time when that transition will come together," said Event Director Andy Tourell. “We have new boats, new teams, some new course layouts and some cracking venues, starting with Oman - now it’s time for the sailors to show us what they can do.”

With crews made up of elite level sailors, boasting 20 Olympic campaigns, 31 America’s Cup campaigns and 45 World Championship titles, the competition is set to be fierce.

The Extreme Sailing Series™ is set to bring catamaran racing on foils to life like never before, with the provision of data from new foiling sensors mounted on the GC32.

The new boat sensors measure the height of the boats above the water as they fly along on the Stadium Racing course. The performance data secured from the new sensors will soon be processed through the SAP Sailing Analytics, providing real-time data directly to the teams and enabling them to get better insights and modify their strategy throughout the race.