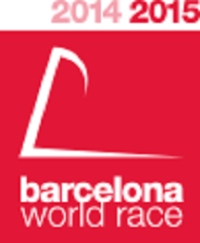 A selection of action pictures taken from the start of the Barcelona World Race when 8 yachts sailed from Barcelona on a non-stop race around the world. Latest Update on the Race

Monday night into Tuesday has seen gaps open up between the leading four boats of the Barcelona World Race as they line up for the Canary Islands.

Alex Thomson and Pepe Ribes on Hugo Boss are now 13 miles ahead of the Neutrogena. They have chosen to stay east of Lanzarote and Fuerteventura, keeping to the windward side of the island group on what is the most direct course for them.

They are in lighter trade winds conditions now, 15kts from the NE and making better speeds, 14-15kts of boat speed, significantly quicker than their nearest rivals – second placed Neutrogena and third placed GAES Centros Auditivos which are lining up to go between the most easterly islands – Lanzarote then Fuerteventura - and Grand Canaria to their west.

Cheminées Poujoulat has dropped back to 43 miles behind Hugo Boss, still lying in fourth place.

The Trade Winds are now better for the leaders and will strengthen as they get south. Hugo Boss was around 10 miles west of Lanzarote’s east coast this morning and will continue on the same gybe through at least until this afternoon.

For the boats passing between the island there will be a local, lifting shift to the east caused by the land upwind of them, and then by the south end of Fuerteventura the winds will accelerate giving them a slingshot again. Renault Captur look like their routing will be much the same, between the islands.

One Planet One Ocean are going more west, which has to be good for them in the longer term as well as the leaders will still need to get west to cross the Doldrums, and it does look like they will be the first to pass west of the island group. Aleix Gelabert and Didac Costa have had a slow night but ar staying well in touch with the fleet generally.

In the east, closer to the African coast, the Garcia brothers on We Are Water have an excellent VMG by virtue that they are pushing south in good breezes.

And while Spirit of Hungary are in the Atlantic they have still been struggling, just 4.4kts this morning, the good news for Nandor Fa and Conrad Colman is they should start to feel the benefit of a N’ly breeze this morning and that should allow them to make much better speeds down the course.