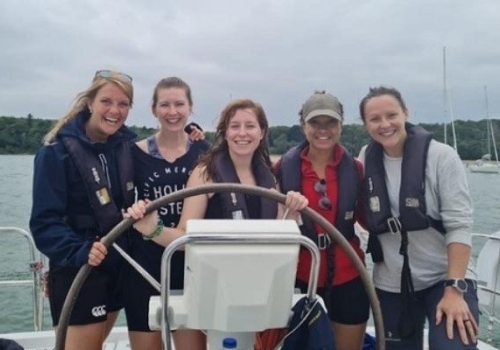 2021 was a busy year for sail2help. Not only was the team able to donate more than £20,000 to Papyrus, create a website and employ the services of a solicitor to help with the registration of the programme as a CIO with the Charities Commission, they also conducted a six boat Escape Day for a large group of nurses from the DMS Joint Hospital Group (South) so that they could leave their evident strain on the dockside.

2022 starts as it means to go on with a fundraising weekend at the end of April to Guernsey, followed by a fundraising Ladies Day on 4-5 May hosting representatives from Papyrus & ISWAN. The annual Round The Island Race will take place between 24-25 June, with an Escape Day fore and aft of the race, as well as a plan for more sailing Escape Days throughout the rest of the season. This includes a five boat event with overnight stay for a different group of 30+ nurses from DMS JHG on 6-7 July.

The annual Round the Island Race, organised by the Island Sailing Club, is a one-day yacht race around the Isle of Wight, an island situated off the south coast of England. The race regularly attracts over 1,400 boats and around 15,000 sailors, making it one of the largest yacht races in the world and the fourth largest participation sporting event in the UK after the London Marathon and the Great North and South Runs.

Competitors come from all over the UK, other parts of Europe and as far away as the USA to follow the 50 nautical mile course round the Isle of Wight. Starting on the famous Royal Yacht Squadron line in Cowes, the fleet races west to The Needles, round St Catherine's Point and Bembridge Ledge buoy, and back into the Solent to the finish line at Cowes.

For a full schedule of events, please click here.

Following the tragic loss of his eldest son George, and previously his brother Peter, former Royal Navy aviator Captain Tim Davies put his heart into setting up the sail2help programme to raise awareness of mental health and help reduce the incidence of suicide. His mission now is to raise funds to facilitate his events for bereaved families and to continue making donations to Papyrus, the UK’s main suicide prevention charity for young people.

For 2022, it is his intention to at least try and match the £30k year on year to support Papyrus, Yacht Crew Help and fund more escape days each year.