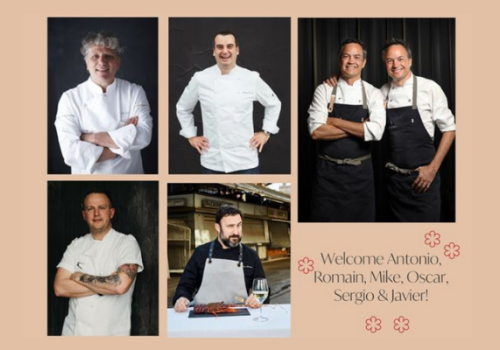 The organisers of the 2022 MYBA Charter Show, which runs from 25-28 April in Marina Port Vell in Barcelona, are thrilled to confirm that Antonio Mellino and Mike Jennings will be joining the esteemed panel of judges at this year's Superyacht Chefs' Competition.

Antonio Mellino needs no introduction. He is a point of reference in the culinary world and a strong, steady supporter of the MYBA Superyacht Chefs' Competition over the years. When asked to describe his world, he said it consists of "Passion, research and a little insanity." He is passionate about growing his own ingredients, respecting tradition and seasonality, and he is continuously conducting research in his quest for perfection.

This approach is evident in his signature dishes such as linguini with zucchini and zucchini flowers with basil and black pepper, perfected over 10 years, and which contributed to earning  his two Michelin stars at the 'Quattro Passi' restaurant in Nerano. We are thrilled to have Tonino back.

We are also delighted to welcome Mike Jennings for the first time. Mike is an accomplished Michelin trained chef with over 25 years’ experience working within some of the UK’s most notable restaurants. He has worked under some of the UK’s most decorated chefs from Shaun Rankin to Gary Rhodes OBE. He also opened Grenache in Manchester, a renowned eaterie included in the prestigious Michelin guide.

Mike has a keen eye for detail and a passion for seasonal produce and set up The Hospitality Hut consultancy to support the hospitality sector using his years of experience with support on training, development and concept design.

Completing the panel of judges are Romain Fornell, Oscar Manresa and the Hermanos Torres, who will each be participating for one judging day.

Romain is returning for a second time, this year. In 2000, he opened Chaldette in Lozère, where he showcased his creative potential and earned his first Michelin star the following year,  making him the youngest chef to do so at just 24 years of age. Romain moved to Barcelona in 2002, where he has lived ever since, to take charge of the restaurant Diana. In 2004, Diana became 'Caelis' and Romain received another Michelin star becoming the only French chef to receive this distinction in both France and Spain.

In 2015, he was named culinary director at Hostal de La Gavina in S’Aragó with special emphasis on the Candlelight restaurant, which took his name in 2016 becoming Candlelight by Romain Fornell. In 2018, he won the award for the Best Restaurant Chef at the European Hotel Awards by Références, and Caelis was awarded “la meilleure table internationale” as part of the Trophées de la Gastronomie held in Lyon. In 2019 Romain and his associate Hugues de Montfalcon regrouped and branded all their restaurants under the name Goût Rouge.

Oscar Manresa is both a chef and a businessman, immensely popular in Barcelona due to his relationship with La Boqueria. He also dedicated his first book to this legendary location, Mi Boqueria (Gastro Planet), a portrait of what many consider to be the best market in the world. Oscar was born in Barceloneta, the fishing district of Barcelona, where he first developed his cooking skills. However, before moving to the kitchen, he was an executive in the computer world and ran his own flamenco school, one of his great passions. Flamenco serves as the soundtrack for many of his restaurants and continues to be a constant theme in his life.

In 2000, Oscar decided to give up technology and went on to open his first restaurant, Magatzem del Port, with its unbeatable paellas, followed by La Torre de Altamar, already a Barcelona classic.

It is going to be an exceptional competition this year and we look forward to seeing you all there!