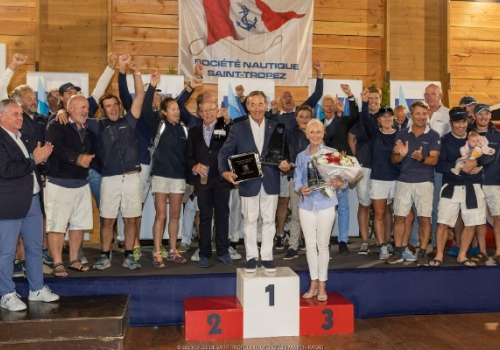 A most rewarding week two of Les Voiles de Saint-Tropez for the maxi yachts concluded with an easterly eventually filling in to provide 45 of the world’s largest sailing yachts with a last opportunity to put points on the scoreboard. Given the delayed start, the race committee from the Société Nautique de Saint-Tropez and the event’s co-organiser, the International Maxi Association (IMA), sent the faster maxis and supermaxis in IRC 1 and 2 off on a 25 mile coastal course, while the IRC 3 and 4 mini maxis sailed a shorter 15 mile version in a wind that built to 18-19 knots.

In IRC 1, there was a leader change when Sir Lindsay Owen-Jones’ Wallycento Magic Carpet Cubed won, her first victory of the week. This caused George David’s Rambler 88 to be displaced from the top spot into second, but by only one point, the US maxi in turn two points ahead of Wendy Schmidt’s Botin 85 Deep Blue, winner of Tuesday’s race.

Owen-Jones was delighted by the result, especially following his win in the Maxi class at the Maxi Yacht Rolex Cup last month. “He is pretty stoked,” said Magic Carpet Cubed’s captain Danny Gallichan. “It is different for us - quite a diverse class, but it is super interesting to compete with all those other boats.” Until 2019, Magic Carpet Cubed usually competed in the Wally class at events such as this. “Deep Blue and Y3K are more like us, but racing against Leopard, Rambler and Comanche makes it interesting. On some points of sail they are so quick they are unbeatable. You end up sailing in different races, but it is cool.”

Gallichan added that after today’s quiet start, conditions ended up being “more sporty” than anticipated. “To be honest we had a shocker at the start, which we weren’t happy about, so we had to push hard after that - and it all came good. There were other boats making mistakes - Deep Blue had some problems with their kite, etc. We just tried to be consistent, but we got a win today which was amazing.”

An unbroken string of wins for Terry Hui’s Lyra ended today. The Chinese Canadian’s Wally 77 is heavily optimised and sailed by a crack squad of pros. She managed to finish last month’s Maxi Yacht Rolex Cup with a perfect scoreline and looked set to continue this in IRC 3 B at Les Voiles de Saint-Tropez.  But today she finished fourth, the race going to Alessandro del Bono's seasoned crew on the Reichel/Pugh 80 IMS maxi Capricorno. However for Hui there was solace in still comfortably winning IRC 3 B overall by three points from Capricorno, with the 2020 class winner, Philippe Ligier's Wally 80 Ryokan 2, third. 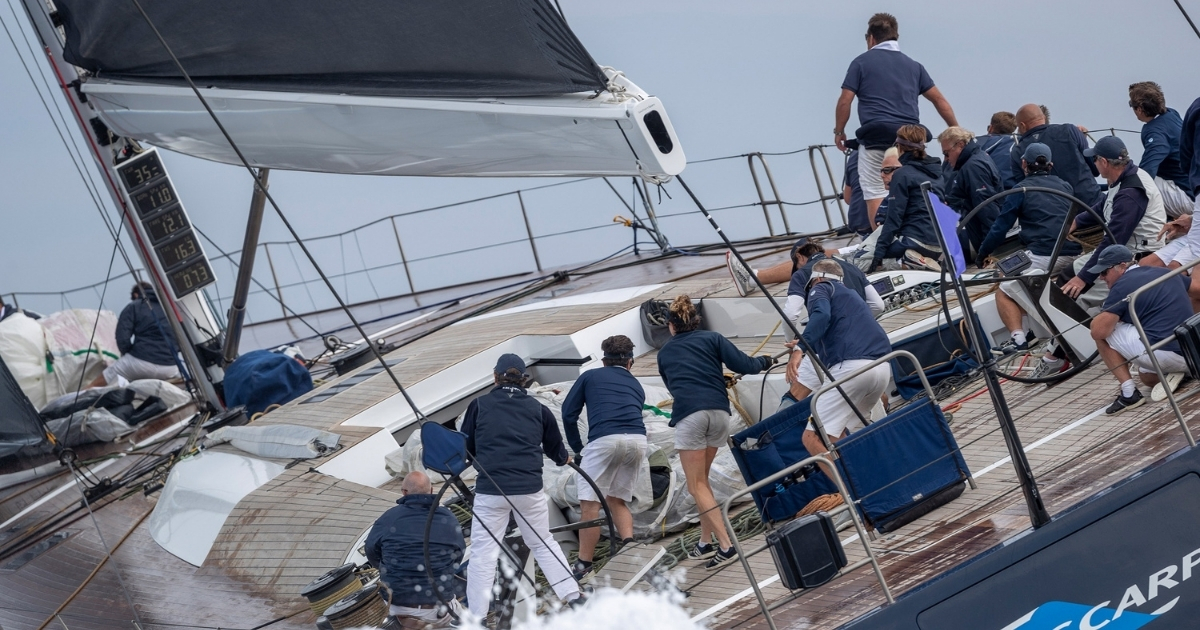 “It was great - a really tight race,” said Hui, who already intends to return to Saint-Tropez in 2022. “On the first day we won by only a minute and the second day a couple of minutes, but today we finished fourth.”

While Lyra usually races in the Wally class, this year they were incorporated into the bigger IRC fleet and, with IRC 3 B and A starting together, Hui found himself on a line surrounded by 18 other mini maxis. “It was much more exciting than just having a few boats - it was so tight. The starts are very important, but very difficult. Today we didn’t start in the optimum position, but then we got into some good air. The competition was really tight.”

Being an IMA member, Hui had had Friday’s night hot ticket to the International Maxi Association Party held at President Benoît de Froidmont’s palatial resident in Saint-Tropez. “The party was good - I think Benoît has started something new with the IMA there. I’ll leave it at that!”

Some of the biggest boats were racing in IRC 2. Stealing the limelight here unquestionably were the Js Topaz and Velsheda, at 42.7 and 39.5m LOA respectively the longest yachts competing. After Velsheda showed a clean pair of heels to Topaz at the Maxi Yacht Rolex Cup, her rival exacted sweet revenge here in Saint-Tropez with a perfect scoreline. Topaz picked up the prize for the top International Maxi Association member at Les Voiles de Saint-Tropez.

“We had a good day,” described Topaz’s skipper Peter Holmberg. “We waited for the wind, but it came and we had a great race.” Despite the wind filling in, the course was full holes, said Holmberg. “It was a good work out driving and trimming.” 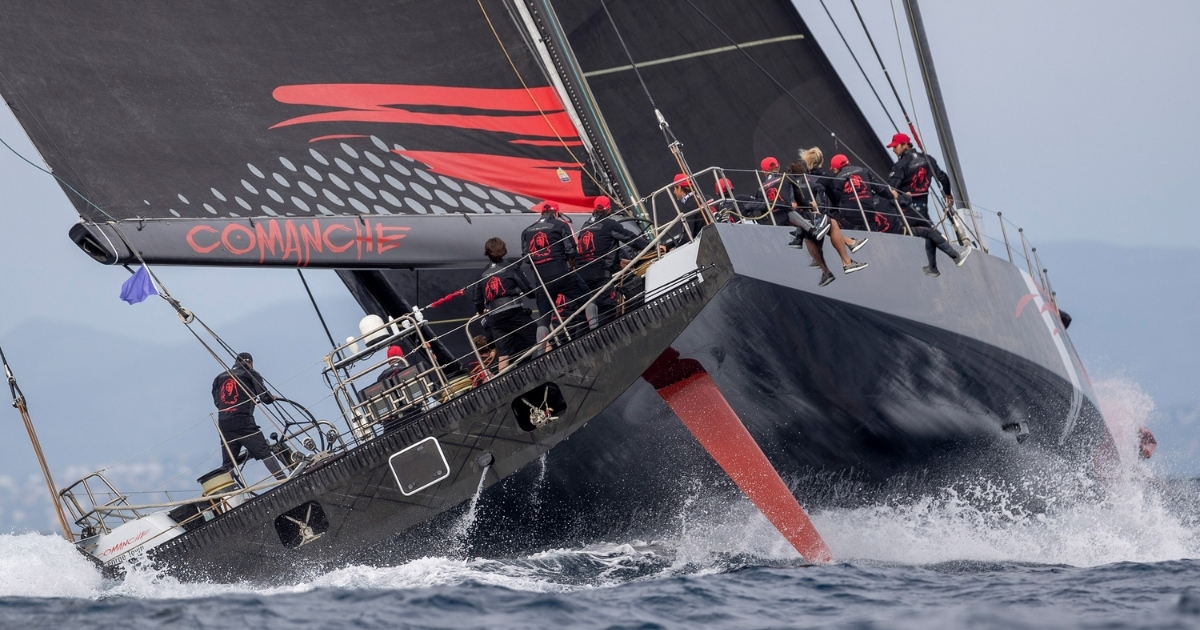 While they race in IRC 2, which included yachts such as the Swan 82FD Kallima and Swan 80 Umiko, the eyes of the Topaz eyes were only on Velsheda. “Because they are a faster, our gameplan was to crush them at the start, which we did - we boxed them out. So we got them behind us and just gave them gas and grew a pretty nice lead six miles upwind to the first mark, then kept that lead downwind to the next bottom mark and then it was the jib reach and we maintained that same lead.

“Then on the second beat in rougher water they pulled 2.5 minutes out of us, so we only had a few boat lengths on them at the top mark. We gybe-set and on the way to the finish, it all came down to who peeled from the spinnaker to the jib cleanly. We pulled it off, kept our lead and beat them across the line by one minute, with the owner driving, which was a pretty nice end to her regatta.”

Of this week’s maxi racing at Les Voiles de Saint-Tropez, International Maxi Association Secretary General Andrew McIrvine was delighted: “We have enjoyed a superb turn-out of maxis from across the fleet and it has been nice to enjoy seeing so many of them stern-to in Saint-Tropez’s famous harbour.

“We are also pleased that with the help of the Société Nautique de Saint-Tropez, the International Maxi Association has developed the racing for our members with our own international race officer Ariane Mainemare installed on the race committee boat working alongside the SNST’s race team and with starts and courses that have improved the quality of the racing.”