Bella Mente and three other Maxi 72s - Peter Ogden's Jethou (GBR), Dieter Schön's Momo (IVB), and George Sakellaris's Proteus (USA)- will come to St. Barth from April 11-16 to sail as a group in the seventh edition of the Les Voiles de St. Barth regatta, joining tens of dozens of other racing machines in classes for Maxi, Spinnaker, Non-Spinnaker, Multihull, and One-Design.

Bella Mente, or 'beautiful mind', describes the spirit of Les Voiles de St. Barth as easily as it sums up American business man Hap Fauth's state of being when he's skippering his Maxi 72 of the same name.

"That's how I feel when I am on Bella Mente and racing: a happy spirit, a happy mind," said Fauth, who counts this as his third boat of that name and is a nominee for US Sailing's Yachtsman of the Year due to a slew of victories in 2015, including the Maxi 72 World Championship.

“We will have an enhanced fleet at Les Voiles de St. Barth in 2016. It will be the first time Jethou and Momo have sailed in the Caribbean (the event counts toward a first-ever Maxi 72 Season Trophy) and we anticipate attendance by most of the race boats in the Caribbean. There are always a number of maxis and super maxis in the fleet, so it's always very good racing. I love Les Voiles de St. Barth. It's exciting and, in my opinion, very well run as a regatta.” Confirmed is the 90-foot La Bête (which competed as Rambler at the 2010, 2012 and 2014 Les Voiles de St. Barth), returning with a new owner and program headed by French sailor Yves Montanari. The 100-foot Comanche, owned by Jim and Kristy Hinze Clark, will also be making her second trip to the regatta, with American Ken Read at the helm. Other standouts on the big-boat roster are Irvine Laidlaw's Monaco entrant, the 82-foot Highland Fling XI; the Volvo Ocean Race 70 SFS with Frenchman Lionel Pean skippering, and the Swan 90 Odin, with Californian owner Tom Siebel at the helm.

“There is a core group on Odin's racing team that includes myself as navigator and Charlie Ogletree (the USA's 2004 Tornado Olympic Silver Medalist) as tactician,” said America's Cup veteran Peter Isler, noting that Siebel, well known for campaigning Orion (his MOD 70 trimaran on the West Coast), sailed at Les Voiles for the first time last year when his 90-footer was new to him.

“It's wild because you only need a few guys to sail the multihull, which is one of the world's fastest ocean sailing boats, but you need a big gang for this 90-footer, aboard which we've enjoyed some awesome racing, but of course the pace is much slower.” Isler said he and fellow navigators at Les Voiles de St. Barth have always to be “on” because of the coastal racing with turning marks close to shore. He laughed while explaining, “It's a fun kind of Caribbean visual navigation you do: you look over the side to see how close you can get to rocks and islands!”

He recalls that last year the super maxis and maxis all started at once but were scored separately. “That in itself is a lot of work for the tacticians, since we're all so close together at the start of the races.”

Lloyd Thornburg, another nominee for US Sailing's 2015 Yachtsman of the Year, will also return in 2016 to defend his multihull class title with his record-breaking MOD 70 Phaedo.

While exceptional racing around the spectacularly rugged shoreline has proved to be the hallmark of competition at Les Voiles de St. Barth, it's also a lot of fun attending the regatta's many on-shore gatherings and parties, soaking up the island's unique spirit. St Barths is an island of just 9.7 square miles with only 9,000 year-round residents, legally part of France along with Saint Martin, Gaudeloupe and Martinique. French is the local language and the French influence extends to the local cuisine and the lovely joie to vie in the demeanor of local residents. Though dependent on tourism, the island is free of commercial intrusions from large hotels and casinos. Instead there are dozens of sparkling white beaches, secluded villas dotted around the countryside, and just one tiny airport, which becomes the gateway for hundreds of racing sailors from across the globe each April.

Les Allures de l'élégance, a 232-page volume of the most beautiful photos from Les Voiles de St. Barth celebrates the refined universe of the regatta created in 2010. Published by Cercle D'Art in collaboration with Christophe Jouany, official photographer since the start, the book retraces all six years of the regatta, with striking images of all the action. Also included is information about the history of the island, the various classes in the regatta, with commentary and interviews by participants such as top French sailor, Loïck Peyron, ambassador of the 2015 edition. 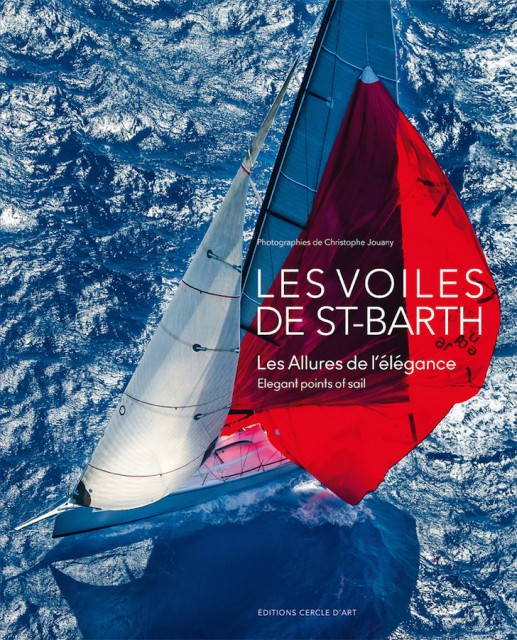