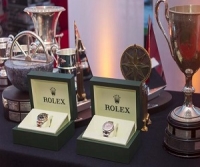 Rolex’s European yachting season commences in mid-June with the Giraglia Rolex Cup which includes the Mediterranean’s oldest offshore race. The competition is a treasured part of Rolex’s association with sailing, encapsulating the sport’s noble values and the spirit of fair play and bonheur that unites all of Rolex’s yachting events. The Giraglia Rolex Cup celebrates its 63rd edition in 2015. Following a first leg from Sanremo (starting on Friday, 12 June) the fleet will gather in the chic harbour of Saint-Tropez for three days of inshore competition (from Sunday 14 - Tuesday 16 June) before embarking on the main event, the 243-nautical mile offshore race (commencing Wednesday 17 June) to Genoa via the Giraglia rock. A historic event, the Giraglia Rolex Cup has emerged from humble origins to become internationally-revered, attracting in excess of 200 yachts. The event has always enticed a core of amateur French and Italian sailors as well as professional crews sailing state-of the-art racing yachts. This combination remains at its heart. The dockside atmosphere is always welcoming and by the end the crews are like old friends, readily sharing their experiences. The final prizegiving, where winners are awarded a Rolex timepiece alongside some impressive trophies as reward for their excellence, is a celebratory occasion, and a true demonstration of the competition’s spirit. Saint-Tropez is a popular destination among sailors, and is an ideal location for three days of competitive inshore racing and the start of the Giraglia Rolex Cup offshore race. This picturesque artist’s haven offers the crews a relaxing and convivial summer atmosphere and the perfect setting for the highly-anticipated Rolex crew party. The race was founded in a Paris bistro in 1953 by members of the Yacht Club de France and today’s principal organisers the Yacht Club Italiano (YCI). It has run each year since. Collaboration between the organising yacht clubs has always been close. Today, the Société Nautique de Saint-Tropez and the YCI, both partner yacht clubs of Rolex, have maintained that tradition of close friendship and fraternity. Last year’s decision to finish the race in Monte-Carlo was made in keeping with the spirit of the race - the YCI’s contribution towards the inauguration of the Yacht Club de Monaco’s stunning new clubhouse. As a partner of both yacht clubs, Rolex was fully supportive of this demonstration of comradeship and was proud to be a participant in a landmark moment in the life of the race. The arrival point for this year’s race will be the YCI’s home in Genoa. The iconic symbol of the Giraglia Rolex Cup is the Giraglia rock itself. Like the Fastnet Rock, Stromboli and the Organ Pipes, it has become mythic in the minds of competitors. A large ridge-backed rock, the Giraglia is the northern extension of the Cap Corse, the out pointed finger on the hand of Corsica. It lies barely one nautical mile off the coast of the island, measuring 600-metres in length, a mere 50 metres wide and rises just 60 metres above sea level. For the fleet it signals the race’s virtual halfway point. Rolex has partnered the competition since 1998, helping revive the race’s fortunes after a period of difficulty. The event enjoys a significant international standing and over the past decade has witnessed a rise in fleet size, notably from double-handed and single-handed crews, those most fervently pushing resources to the limit. The current record stands at 220 race starters, set in 2010. The race record at the Giraglia Rolex Cup has been broken seven times in the event’s illustrious history. The list of winners comprises boats which have defined eras in the sport, including Stella Polare andBenbow through to Neville Crichton’s two versions of Alfa Romeo (victorious in 2003 and 2008) and Igor Simcic’s 100-ft Maxi Esimit Europa 2, four-time line honours winner at the event, which in 2012 set what looks like an unbeatable race record time of 14 hours, 56 minutes 16 seconds. The current defending champion is the Swiss yacht Tixwave, a Swan 42. She follows a host of Corinthian crews to win the race on handicap, sailing boats largely in the 30-52 foot range. Seven of the last ten winners of the race have been crews composed entirely of Corinthian sailors. “It was quite special to do the Giraglia Rolex Cup this year because it is exactly 40 years ago that I did my first one,” explained Tixwaveskipper Bernard Vananty following last year’s victory. “I was 18/19 years old. It was very windy, we had a prototype boat and we could not finish the race. Last year we came back to do the race again, we were second overall and this year we have won!” Vananty’s story is typical and his victory demonstrates the persistence characteristic of the competing crews as well as capturing the race’s timeless appeal across generations. Competing in the Giraglia Rolex Cup does not require the same level of resources or endurance as a 600-nm race, but the race is intense and the fleet can face testing, brutal conditions. With most crews aiming to finish within a 24-48 hour window, the watch systems employed by the longer races are often ignored and the Giraglia becomes a full on, ‘stay awake’ experience. Conditions – whether calm or ferocious - can be punishing; in 1998 only five yachts out of 78 completed the race due to an almost complete absence of wind. The relatively short course ensures the fleet remain more compressed than during other offshore races; yachts often have their main rivals in sight which creates interesting tactical duels. Some of the finishes have been notoriously tight, notably in 2005 when Black Dragon sneaked passed Magic Carpet only 300m from the finish line in Genoa, eventually finishing a mere minute ahead.

The Giraglia Rolex Cup opens Rolex’s European yachting season. The event will be followed by August’s Rolex Fastnet Race, one of the world’s most famous offshore races. For full details of the Rolex’s 2015 yachting calendar please click here.