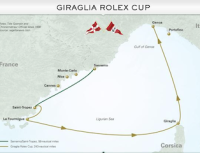 “During the final prizegiving in Montecarlo last year, I referred to the Giraglia as like being the old lady of sailing. The race has a unique atmosphere and has seen everything over its 63-year history, from great champions and great personalities from around the world. Nothing can surprise the old lady anymore!,” explained Carlo Croce, President of both race organizers the Yacht Club Italiano and the International Sailing Federation (ISAF).

240: Record Starters
Even as the 243-nm offshore race from Saint-Tropez, France to Genoa, Italy started on Wednesday 17 June, the event was creating a new milestone. The 240 starters represented a race record, surpassing the figure of 220 entrants set in 2010. The total number of participants for the week’s activities is even more impressive with nearly 280 yachts having contested either the race from Sanremo to Saint-Tropez, the three days of inshore racing on the Côte d'Azur, or the offshore race. 17: Nations Represented
Yachts from 17 countries and territories competed in the offshore race – Austria, Belgium, the British Virgin Islands, France, Germany, Hong Kong, Hungary, Italy, Latvia, Malta, the Netherlands, Russia, Slovenia, Spain, Switzerland the United Kingdom and the United States: a demonstration of the race’s burgeoning international reputation. The list of international sailors included Australia’s Adrienne Cahalan, a 23-time veteran of the Rolex Sydney Hobart Yacht Race, competing in the race for the first time as navigator on the 100-ft Maxi Esimit Europa 2. “How can you not enjoy a race that starts in Saint-Tropez, finishes in Genoa and includes some of the most beautiful parts of the Mediterranean!,” explained Cahalan, who was to add another line honours title to her sailing achievements. 15: Years of Trying
Contrary to early forecasts, the 2015 Giraglia Rolex Cup turned out to be a ‘big boat’ race. It was a light air edition, especially for the majority of the fleet who took 48-60 hours to complete the race. The frontrunners arrived after around 30 hours at sea, late afternoon on Thursday. Sir Lindsay Owen-Jones’s Magic Carpet Cubed (GBR) finished second on the water finishing 65 minutes behind line honours winner Esimit Europa 2. On arrival, Owen-Jones’s thoughts were fixed on the disappointment of missing out on line honours. An impressive leg from the Giraglia rock to Genoa had allowed his crew to close the gap on Esimit but not sufficiently to mount a challenge to be first over the line.

As the fading breeze on the notorious approach to Genoa destroyed the chances of overall victory for the much-fancied Maxi 72s, Magic Carpet installed herself as leader on handicap. The fleet further behind would suffer the same fate and it quickly became apparent that Owen-Jones had guided his Wally Cento to an unprecedented and unexpected success: within a day the disappointment of losing out on line honours was replaced by the joy of overall victory. Owen-Jones cut an ecstatic figure at the final prizegiving held at the Yacht Club Italiano in Genoa. “We are delighted with this victory. After 15 years of trying, and having won line honours two years ago, we had almost given up winning this title! This is a lovely, fun race to do, the crew all love it. It’s full of unknowns.” Igor Simčič’s 100-ft Maxi is the current race record holder having finished in a blistering time of 14 hours, 56 minutes and 16 seconds in 2012. In 2015, she secured a fifth line honours victory in six years (having not contested the 2013 edition, claimed by Magic Carpet Cubed). Esimit sailed a near flawless race having led from the beginning in Saint-Tropez.

“It was a tough race,” confirmed skipper Jochen Schümann. “We had a very good strategy and weather model which matched the conditions quite well. The first part to the Giraglia rock was very good for us, we had a very good lead over Magic Carpet. At the rock we got stuck and struggled for a while when there was no wind and they closed in until we stretched more towards the end of the race. Being in control from the beginning was key to us doing what we wanted to do.”

72: Race within a race
Five Maxi 72s made up the fleet and with their IRC handicap so similar they were effectively sailing one-design. For a period it seemed whoever emerged from this group of boats would become the handicap winner. As light faded on Thursday evening, and with the Maxi 72s approaching Genoa, so did their hopes of overall victory. The wind shut down, with the leading yacht Robertissima III (ITA) forced to park. Caol Ila R (USA), MOMO (IVB) and Jethou (GBR) looked to have had their moment but it was George Sakellaris’s Shockwave (USA), the oldest of the quintet which ghosted through to win this race within a race. 1: First Solo Finisher
Italian yachtsman Pierpaolo Ballerini added his name to the Giraglia Rolex Cup record books becoming the first ever solo sailor to complete the race. Sailing the 33-ft Azurre, Ballerini completed the race in a little over 50 hours seeing off his two solo rivals to take class glory and write his name in Giraglia Rolex Cup history 64: Back in 2016
At the final prizegiving the crews of Esimit Europa 2 and Magic Carpet Cubed collected Rolex timepieces, and the latter the Giraglia Rolex Cup trophy, for their exploits on the water. The 64th edition of the Giraglia Rolex Cup will take place in June, 2016 and it would be no surprise if the record number of entrants was surpassed yet again. Video highlights from the 2015 Giraglia Rolex Cup are available to view here.

Media wishing to embed the video on their website can do so by clicking here.