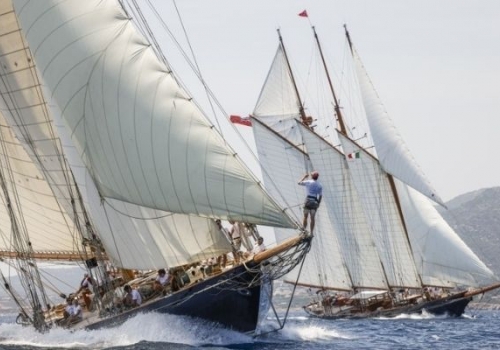 The Giorgio Armani Superyacht Regatta got underway today, an event organised by the Yacht Club Costa Smeralda with the support of new title sponsor Giorgio Armani. Racing will run through Saturday, 4th June.

The 15th edition of the event officially opens the YCCS sporting calendar, as well as the Mediterranean superyacht sailing season. Eighteen boats are enrolled, ready to sail in and around the islands of the La Maddalena archipelago.

As a preview to what is set to be a wonderful week of sailing in Sardinia, the two classic schooners, Mariette of 1915 and Shenandoah of Sark put on a splendid show on the water today when they engaged in a friendly sail in company between Capo Ferro, and the Monaci islet before continuing past the Isola delle Bisce.

Mariette of 1915 - a twin-masted gaff schooner built in Rhode Island, on the East Coast of the USA, by Nathanael Herreshoff - returns to Porto Cervo after her last participation in the Superyacht Regatta in 2019. For Shenandoah of Sark, meanwhile, this is her first time at the event and, together with Kenora, she will enjoy following the racing and the social events without competing. This historic sailing yacht, the most impressive of the fleet with her 42-metres in length, was built in 1902 by the renowned Townsend & Downey shipyard and in 2007 visited Sardinian waters for the Veteran Boat Rally, organised by the YCCS in Porto Cervo.

This evening owners will attend the traditional Welcome Cocktail, while racing will officially get underway tomorrow, 1st June.

The WallyCento Magic Carpet Cubed returns after her last visit in 2019, where she claimed her third consecutive victory. In addition to Mariette of 1915, participants in the Giorgio Armani Superyacht Regatta include the 33-metre yachts Inoui and Win-Win, the Wally 94’ Magic Blue, the 32-metre sloop Ribelle, and the Southern Wind Morgana, built in 2020 and competing in the event for the first time. A new entry to the regatta will be the Wally 93’ Bullitt, one of the brand's most recent launches, which debuted at the PalmaVela in May. The Spirit Yachts 111 Geist will also take part, a vessel that was named Sailing Yacht of the Year at the World Superyacht Awards in Monaco in 2021, two years on from her launch.

In the Multihull category, the Gunboat 68 Highland Fling 17, winner of the most recent edition of the Superyacht Regatta, will do battle with Allegra, a catamaran designed by Nigel Irens and Nauta Yacht Design.

Once again, the Southern Wind Rendezvous and Trophy will take place within the event, gathering together boats from the shipyard to sail in company in the waters of northern Sardinia. Five yachts are enrolled in this category: the SW 82s Ammonite and Feelin’ Good, the SW 100 Cape Arrow, the SW 102 EgiWave and the SW 96 Sorceress.

Michael Illbruck, Commodore of the Yacht Club Costa Smeralda: "We are delighted to open the sporting season in Porto Cervo with the Giorgio Armani Superyacht Regatta. It will, as always, be thrilling to see the imposing superyacht fleet lined up along the dock and sailing through the islands of the La Maddalena archipelago. On behalf of the YCCS, I'd like to welcome all the participants and wish each of them fair winds!”

The first starting signal is scheduled for tomorrow, 1st June, at 12:30 p.m. The forecast gives variable winds of 5 to 8 knots.