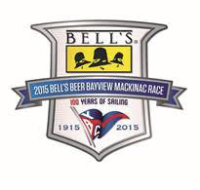 More than 5,000 people gathered on the grounds of Mackinac Island’s Grand Hotel today to celebrate the fast finish of Bayview Yacht Club’s Bell’s Beer Bayview Mackinac Race, which started Saturday, July 18, from Port Huron. Out of 250 registered boats, 244 actually started, and seven boats did not finish, making the total count for boats completing the race 237.

According to Chairman Peter Wenzler, who sailed aboard Bill Alcott’s (St. Claire Shores, Mich.) 65 footer Equation, a “white squall” hit the fleet shortly after the start, making a whole lot of wind out of what started as a light downwind breeze. While some spinnakers became streamers at the tops of masts, others were locked and loaded or temporarily switched out for easier-to-handle headsails before the wind calmed and then elevated again to a more sustainable and “for the most part wonderful” 22 knots over flat, waveless water.

The big winner was Il Mostro, owned by Peter Thorton and his son Christopher Thorton (Bay Harbor, Mich.) It not only topped Class A but also took Division I and Overall honors.

On Monday, the elder Thorton was enjoying sunset on his boat in Mackinac Harbor, reflecting on his team’s victory and thinking about how “life is good,” a recurrent theme that seems omnipresent from start to finish at this 91-year-old event, keeping it relevant in the sport of yacht racing each year.  “There was a lot of carnage in the beginning, and we were dodging boats left and right…and with all the spectators…it was something to see,” said Thorton, “but that’s where I think we got jettisoned and pulled ahead. In the first 30 minutes of the race, we just fired through there with a J4 (storm jib) up. Our nemesis, Windquest, they are  great competitors and beat us in Chicago (at the Chicago to Mackinac Race),  but we weren’t going to allow them to do it twice.” Thornton said the wind lightened at times, mostly when the fleet encountered fog banks, but for the most part, it was in the upper teens, enabling Il Mostro to establish a new elapsed time Cove Island Course record for monohulls of 23:39:54.  “On Sunday, we were tacking to the finish from noon on. If we had been able to keep reaching like we had been earlier, we probably would have shaved a couple of hours off that. Our race was near perfect, and my hat’s off to my team. It is my most memorable Bayview Mackinac Race of all time.”

Thornton added that Il Mostro, which finished second in the 2008-2009 Volvo Ocean Race, lives up to its thoroughbred reputation in conditions like it encountered here. “When it gets a breeze, there’s nothing faster; anything 11 knots or over, it just takes off.  It’s a pleasure to drive – the most exciting yacht I’ve ever owned.”

Division II (Shore Course) and Class Q was won by the 36’ Flying Buffalo, owned by Al and Bob Declercq (Clinton Township, Mich.). The boat was designed by the Declercqs’ father in the early 1960s (the design later sold to Cheoy Lee) and famouslywon the Bayview Mackinac in 1964, 1967, and 1968, as well as the Chicago Mackinac overall in 1966 and 1967. Al Declercq, who sailed in his first Mackinac Race in 1966 (he was 12) on Flying Buffalo with his father, said he and his brother tracked the boat down a few years ago and bought it last Fall.

As notoriously fast as the boat is, however, Al Declercq declared that it’s “people who win races.”  He explained that his crew is as good as they come and included three father/son duos (Al/Matthew Declercq, Bob/Robert Declercq, Fred/Ward Detwiler). “At the start, we were probably too prepared, expecting it to blow harder than it did, but it only blew 30 knots. We had thestorm jib under the asymmetrical, then dropped the asymmetrical, and then we sailed without our main for about five minutes. But it’s a 50-year-old wooden mast, so you don’t want to lose the race because you break something on the boat.”

Declercq said what would make this race stand out from the other 46 Bayview Macs he has sailed is the move his team made at Middle Island, a third of the way up the Shore Course. “We were beating in eight knots when we saw flags on the island just ripping, so we tacked into where weed grows like straw on the bottom, and we were in 15-20 (knots of breeze) on a reach for eight miles up the shore. We went into it three miles behind, came out three miles ahead! I’ve never been in there and I don’t think anyone else has either. We bought the boat to win this race, and it looked like we weren’t going to, so we had to take a chance, and it worked out well for us.”

Mulithull Division was won by the 30-foot Corsair Triceratops, owned by Jonathan Alvord (Mt. Pleasant, Mich.), who counts this as his first time here.

“The storm helped us,” said Alvord. “We didn’t drop any sails and took off through the fleet, so it set us up really nicely. It also changed our game plan to run up the Michigan shoreline and catch a lift off the land. Instead, after the storm hit, we sailed the down-wind course on the Canadian coast. It is a beautiful thing to see 70 footers in front of you and no one behind you that has to beat you boat-for-boat.”

A total of 19 classes (12 on the Cove Island Course, and seven on the Shore Course) sailed. The aforementioned Arete, owned by Rick Warner (Marine City, Mich.) established a new elapsed time Cove Island Course record for multihulls of 23:12:51