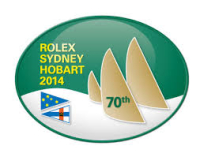 One of the most respected, uber-competitive sailors at the Cruising Yacht Club of Australia, one time holder of its proudest trophy, the Tattersall's Cup, Ed is hanging up his sea boots.   Yet as one Psaltis retires from racing, a new generation emerges.  Ed’s son, Ben, will be cutting the first notch in his Rolex Sydney Hobart belt.

Ed did his first Hobart in 1979, when he was just 18, on the foredeck of father Bill’s S&S 46 Meltemi. This is the minimum age you can do the race these days, but back then things were more relaxed.

Ed was chafing at the bit since he was 16, however, his father would not let him. “Dad was before his time, but he was absolutely right,” Psaltis says. “When you’re a kid you’re ten feet tall and bulletproof. I thought I was up to it, but it was a hard race. The Dacron racing jibs weighed a ton and I certainly learned about changing sails in a bad sea.” Ed credits Bill with teaching him the practical seamanship skills that have become a religion to him. “The stuff he taught you couldn’t get in text books. You just have to get out there and do it.

“Safety isn’t all certificates and qualifications, it’s seamanship. And the only way to learn seamanship is time at sea in bad weather.

“We had weather forecasts about southerly changes coming, but the barometer we always used was the old man’s false teeth. He had a glass no-one was allowed to touch. The way to know if it was going to blow hard was if his teeth were sitting in the glass. If the glass was empty, we knew it wouldn’t be too bad.  He used to get seasick and didn’t want to spew them out.”

There was an inevitability to all this. Bill Psaltis was twice commodore of the CYCA. He had been instrumental in the Club’s first campaigns for the Admiral’s Cup and established the Southern Cross Cup as a genuine international contest when he talked the Brits into bringing over their first team.

“I’ve been around this club since I was two months old,” Ed recalls. “I loved sailing. I loved the Hobart.”

Ed loved the challenge and the adventure. His favourite reading was by mountain climbers and explorers. Like his father, Ed is a successful, be-suited accountant. However, come the weekend, it is all about sailing.

He graduated from the big, powerful Meltemi to racing his own puny 30 footer across Bass Strait; a crazy proposition for anyone not blessed with the immortality of the 20 year old male.

And in 1998, the most horrific Sydney Hobart in history, Ed Psaltis won, at the helm of AFR Midnight Rambler, a little Hick 35.

To read the rest of this story go to www.rolexsydneytohobart.com