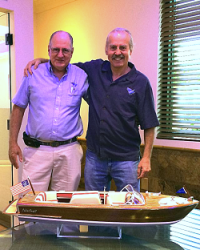 On May 22, 2015 Palladium Technologies, said farewell to one of its most valued employees. Richard Lamos, Director of Engineering, who retired after five very productive years with Palladium.

"Richard was a friend as well as an instrumental part of Palladium's success and we will miss him greatly, but we are also very excited for him as he ventures into this next chapter in his life," stated Mike Blake, President of Palladium.

Before he left Richard was able to hand pick his successor Glen Cox.  Glen is a South African native with both Electrical and Electronics Engineering degrees.

He brings with him many years of people and project management skills honed while working on projects all over the world. Some of his past projects have included renewable and alternative energy systems, water & wastewater controls and SCADA systems, along with extensive PLC development.

We wish good luck to both of these gentlemen.