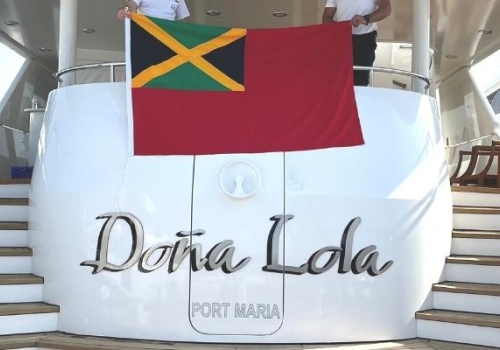 International Yacht Bureau (IYB) assisted the Maritime Authority of Jamaica (MAJ) with its official launch of its new red ensign. Jamaica now joins several other countries that fly a red civil ensign, such as the United Kingdom, Australia, New Zealand, Bahamas, and the British Oversea Territories, including Cayman Islands, British Virgin Islands, and Isle of Man.

Since 1962, Jamaica has been an independent and sovereign nation. As a former colony and current member of the British Commonwealth, Jamaica is afforded the option of flying a civil ensign for its merchant navy fleet. The design and approval process were initiated in 2013 with the launch of Jamaica’s yacht registry. Over the course of 8 years and several changes in government, the approvals progressed through the Jamaican Cabinet, Prime Minister, Governor[1]General, England’s College of Arms, and final authorization by Her Majesty Queen Elizabeth II.

The first red ensign was presented by Capt. Jake DesVergers, on behalf of Jamaica, to Capt. Guy Seymour, master of the yacht Doña Lola. The Westport 130 yacht is managed by Reardon Yacht Consulting. The event took place on April 8, 2022, at Lauderdale Marine Center in Fort Lauderdale, Florida, USA.

“Doña Lola was the very first yacht to join the Jamaican fleet in 2013. Sharing this historical milestone was an absolute,” stated IYB’s President and Chief Surveyor, Capt. Jake DesVergers.

In addition to a choice of 18 different hailing ports, including Montego Bay, Falmouth, and Ocho Rios, Jamaican yachts will now have the option of flying the national flag of Jamaica or the new red ensign of Jamaica.

Since its official launch in October of 2006, IYB has experienced unprecedented growth through the statutory certification of private, limited charter, and commercial yachts on behalf of the world’s leading yacht registries. From its simple beginnings in the yachting capital of the world, Fort Lauderdale, IYB has expanded to 40 locations in the Americas, Europe, and Asia with surveyor availability in every major yachting location worldwide. This network is backed by a team of master mariners, naval architects, and marine engineers experienced in the complex world of maritime regulations, but dedicated solely to yachts. IYB now works with 20 major flags and a fleet of over 1200 yachts.