Yachtie – Keeping Track So You Don’t Have To 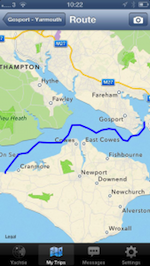 If you’re constantly on the go, moving between regions of the world, it’s nice to be able to track it in some way. This can be especially important for those of us that spend our lives adrift. Whatever the motivation – logistical, professional or simply to keep friends and family informed on our whereabouts – having that information easily and readily available is nice for any sea-going individual.

In the 15th century, this was done by use of rudimentary compasses to gauge direction, chip logs to measure speed, and astrolabs to determine latitude on error-infested charts. Using all of this, some basic calculations and a good bit of reasoning, sailors were usually able figure out where they were in the world and put this information in their logbook for future reference.

Nowadays, all you need to do is turn on your iPhone and Yachtie does this for you instantly. The app uses GPS information from an iPhone or iPad location tracker, which can be made public or restricted to a private group of users. This allows people to follow you – much in the same way as MarineTraffic.com – except it doesn’t use Automatic Identification Systems (AIS) to do so. However, it will update your profile with that information – much in the same way as Facebook.

In fact, the initial idea was to create a hybrid of both. “The original concept was ‘Facebook meets AIS’ – and the original app was simply a way for people to check in,” says Yachtie owner and designer Rob Woodgate. It has since moved evolved to allow users to track and share routes, find friends and make plans to meet up.

“But at its heart, Yachtie is a trip-logger which allows you to record your voyages and, optionally, share your position with others,” he says. It is with this in mind that the app makes it easy to track routes, offering the ability to make notes, record distance travelled and see where you’ve been on a map. Woodgate is himself a yachtie, who enjoys sailing the Solent with his family in their Legend 38. With no pre-existing apps on the market that met his needs, he wrote Yachtie to track his own miles and routes, to allow family and friends to see at a glance where he was in case of emergency, to offer sailing friends a way to coordinate without clogging up the VHF, and “to get all this without killing my battery like most location-aware apps do,” he says.

“I also wanted to learn how to program an iPhone,” he says. “And it was much more fun for me to create something I actually wanted to use.”

The original version was released in late March 2011 but, with feedback from users, Woodgate went back and made some significant changes.

The latest version has been completely re-written for IOS 6 and includes the new messaging system, plus full trip-logging. Since its launch in October, Yachtie has doubled its user database to 2,000 users, Woodgate says.

Since Yachtie is a voluntary smartphone app that traces your location using GPS devices in your phone, it's inherently different than MarineTraffic, which uses AIS. Vessels with gross tonnage of more than 300 tons must be equipped with AIS for security reasons and the information is public and available to anyone. The transponder sends out publicly available information – speed, course, location, name, dimensions. And while MarineTraffic monitors all of these, Yachtie only monitors those who have elected to join – and even then, the information isn't available to other Yachtie users unless you want it to be.

The system works wherever there is a phone signal or WiFi available – thus wherever mobile devices would normally work for you. However, depending on your plan, you may need to have “data-roaming” turned on, which could affect your bill.

One of the main benefits is that Yachtie doesn’t wear down users’ batteries, Woodgate says. Unlike other location-aware apps, Yachtie only uses GPS when you check in to record your location, and then it immediately turns off. One of the new features is a texting-type function between users. “It’s like VHF, but social,” according to the website. So, instead of clogging up the VHF when making plans for meeting up at a bar in Antibes, you can catch up with nearby friends with a quick text message.

The app is currently available only for iPhones and iPads, so the next best thing for Android and Windows Phone users is still to switch between MarineTraffic and Facebook. However, if the app really takes off, Woodgate says it may well show up on other devices too.

“Yachtie is a ‘labour of love’,” he writes on the website. “I’m a sailor who’s learned how to program iPhone – and it’s taken months of development to get Yachtie where it is now. So I’m focusing on making it as good as possible for iPhone first and, if it’s a great success, then I’ll invest the time into learning to create Yachtie on other platforms.”