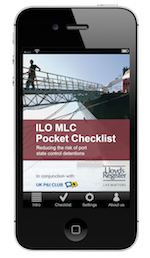 The biggest problem with the Maritime Labour Convention of 2006 (MLC) – as is the biggest problem with bureaucratic regulation in general – is that it’s so long and boring. If only there were a way for you to skip through all the boring stuff and just run through a condensed, easy-to-use checklist produced by a reputable source.

Well, Lloyd’s Register and the U.K. P&I Club have teamed up to do just that. The two maritime insurance giants had already produced a “Pocket Checklist” for ships preparing for inspections against the requirements of the International Labour Organisation’s MLC. But given that paper is completely outdated now, they have recently launched the checklist in a form that really fits in your pocket: in a smartphone app.

The app is available for free for iPhones, iPads, Androids, Windows phones and BlackBerries.

The MLC was introduced in an attempt to ensure that all seafaring professionals, regardless of nationality or the flagstate of their vessel, could enjoy quality working and living conditions. It was ratified in August 2012 and will enter into force in August of this year.

Therefore, for any vessel that was betting against the MLC’s enforcement, the checklist offers a sort of last-minute study guide before the final examination.

The checklist app is simply a digitized version of the printed version. It’s an interactive tool to assist masters, officers and managers in preparing for any inspections that may come with the MLC’s enforcement. The app allows ships’ responsible parties to view the requirements of the MLC and to check off each task as the work is finished.

The MLC compliance checklist is one of six that Lloyd’s Registry has developed in order to address various forms of regulatory requirements. In the series are pocket checklists for Port State Inspection, Marine Fire Safety, Life-Saving Appliances, a Maintenance Guide, and International Safety Management Code (ISM) and International Ship and Port Facility Security Code (ISPS).

So far, the MLC checklist is the only one that’s been developed into a smartphone and tablet app. According to a statement by Lloyd’s Registry, the app can “help operators comply with the convention’s requirements and reduce the risk of port state control detentions.”

In the same statement, Lloyd’s Register’s Port State Control (PSC) specialist, Capt. Jim Barclay, said: “The hard copy versions of our PSC pocket guides are seen by the marine industry as extremely useful for crew members to use as an ‘aide memoir’ to help reduce the risk of PSC detention. With advances in technology it was felt that an electronic version of this pocket guide could be of further help, so we have developed an easy-to-use app that will benefit both ship- and shore-based personnel in the course of their duties.”

The director of U.K. P&I Club, Karl Lumbers, described the MLC as “a significant change to the regulation of employment terms and working conditions for seafarers.” The convention updates more than 65 international labour standards that have been adopted over the previous 80 years, according to Lumbers.

“For the first time, it creates a system of certification and inspection to enforce those standards,” he continued. “Masters and senior officers taking steps now to ensure their ship is compliant with MLC will need support. We believe this pocket guide will help those at the sharp end enormously.”

To order hard copies of the checklist, and other Lloyd’s Register checklists, click here.