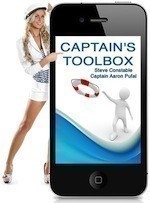 In the cramped quarters shared by yacht crew, it’s especially important to use space wisely. Everything must have its proper place and everything must go back in its place when not in use. In many ways it’s a necessity; but even more than that, it often turns out to be easier that way.

A smartphone or tablet, on the other hand, doesn’t have these spatial restrictions. But it does get cluttered with every new app that populates the screen. It is with both of these points in mind that the Captain’s Tool Box app has grown in popularity within the boating world.

Because not only does the app reduce the cabin clutter by allowing crew to toss out hard copies of training manuals and learning materials, but it centralizes a dozen separate apps in one place. Essentially, the Captain’s Tool Box is like a one-stop shop. It is the Wal-Mart of boating apps. It houses everything that used to be stored in an assortment of different apps – rules and regulations, GPS position, unit converter, even a cloud dictionary – all in one go-to app.

The app was developed by two very different people. Steve Constable is a computer programmer and pleasure boating enthusiast. The co-creator, Capt. Aaron David Pufal, is a long-time megayacht captain and founder of Expedition Research LLC, under which the app is marketed. Constable is the programmer and Pufal is the brains.

Captain’s Tool Box doesn’t house everything yet – no weather function, no wind or tide predictions – but Constable and Pufal appear to be methodically checking off a lengthy list of additions to the app. Every time a new feature is added, the app automatically updates to have the latest version.

Exactly whether the company plans to add GPS-driven tools like weather information remains to be seen. Partly it is a matter of concept: the Captain’s Tool Box is meant to function largely offline, autonomous of any connectivity. That way, if out at sea and without signal or internet, the app is still fully functional. Aside from the GPS function, all of the rest of the data is still available.

In this way, it is very much a glossary reference book – simply a massive collection of information stored in one place. It is perfect for the yachtie studying up for exams. In terms of reference and study materials, the Captain’s Tool Box contains digitized versions of the following:

-Navigation Lights and Shapes: an interactive collection of images reflecting navigation lights and shapes with both the U.S. Coast Guard twilight images and zero light graphics;

-Cloud Glossary: an image catalog with photos of common cloud formations, along with their meteorological definitions and what can be learned and predicted from reading them;

-The United Nations Law of Oceans and Sea. While the major texts – COLREGS and U.N. Law of Oceans and Sea – are offered in easy-to-use digital versions, much of the rest of the reference data is organized in wheel selectors, almost like flashcards. So, when the user is searching for wispy clouds resembling a wind-blown beach, and they come across the photo of Cirrus clouds, the following definition appears: “Cirrus clouds or ‘Mare’s tailes’ are thing wisps of high altitude clouds. When followed by cirrostratus (high gauzy sheets) deteriorating weather may be approaching in 24 to 48 hours.”

The same functionality applies to SOLAS symbols. For example, a symbol which resembles either a firework or a pencil attached to string, would reveal that, under SOLAS, it is listed as a “Line Throwing Appliance.”

It is a handy reference, though it can be a hassle flipping through all of the images to come across the specific one needed. (At the same time, it is hard to imagine any way around this.)

In addition, the app as a glossary of 1,383 yachting and boating terms housed in a setting similar to iTunes, to make finding the term quick.

The wealth of information housed in the app spans the chasm of user knowledge – revealing everything from the definitions of simple yachting terms to references for defining right-of-way in rather hairy situations.

Some of the information isn’t so much practical as quaint – the cloud catalog, the maritime flags, the tool which is meant to allow a user to learn Morse Code.

The most functional and readily applicable item in the app is the unit converter. The company boasts that it contains “every conversion you can think of and a hundred more.” Everything from flow-mass calculations to fuel conversions for U.K. gallons to liters can be quickly calculated and converted. If nothing else, Captain’s Tool Box is a great way for the professional mariner to review and stay informed. And if the guys behind Captain’s Tool Box continue adding on new tools, any new user may just inherit some even cooler features down the road.

It is compatible with iPhone, iPod Touch, and iPad; it requires iOS 4.1 or later.