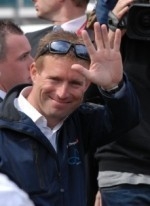 After witnessing the effects of fossil-fuel dependency on the environment firsthand, the 40-year-old Swiss founder of PlanetSolar, Raphaël Domjan, set off on what would become an eight-year mission to show what could be done with renewable energy. His goal: Circumnavigate the globe on a solar-powered yacht.

First, Domjan – a paramedic, mountaineer, engineer and pilot, whose only real boating experience came from sailing his father’s catamaran around a lake as a young boy – needed money. And lots of it – 15 million for the construction of the ship alone. He had already founded the first solar-powered Web-hosting company, Horus Network, but this was a much bigger fish.

In February 2008, after four years of searching, Domjan met German businessman Immo Ströher, owner of the company ImmoSolar, who agreed to finance the project. ImmoSolar appeared to be the perfect partner: the company had been working to advance solar-powered heating and cooling systems for more than a decade. The result was M/S Tûranor, a 31m (102-ft) catamaran named after the elfish word for “power of the sun” in J.R.R. Tolkien’s The Lord of the Rings. It boasts 537 square meters (more than 1,700 square feet) of photovoltaic cells that powered its engines.

The yacht and its four crewmembers – led by French Capt. Patrick Marchesseau and including Domjan himself – set out from Monaco on 27 September 2010, heading west and across the Atlantic Ocean. It was not until 4 May 2012 that she returned, having successfully circumnavigated the globe at a max speed of 10 knots and an average speed of 5 knots, using only power harvested from the sun.

Domjan, who hails from the French-speaking city of Neuchâtel, Switzerland, recently spoke with OnboardOnline about the project.

OnboardOnline: When did you first become interested in environmental causes?

Raphaël Domjan: “For me, there are two things. The first was: I was a mountain guide – I am still a mountain guide. I went to Iceland. And I went there in 1993. And in 2004, eleven years after, I go the same place in Iceland. And I can see the difference in the glacier. Because, one glacier – we lost one big glacier. As you can imagine, when you are playing on a glacier of more than 5km (3.1 miles) long and 700m (nearly 3,000 ft) of altitude, you can imagine the feeling when you come back eleven years later and there is nothing. There is a lake.”

OO: Why did you choose this project – to circumnavigate the globe on a solar-powered yacht?

RD: “When I saw that nobody tried to go around the world with a solar boat, that it’s possible to buy a solar boat, that we can use solar boats; then I was thinking – but why nobody try to do it? So, I had to do it. We had to try to be the first to go around the world by solar energy. Because nobody before had done it with solar energy. And it was clear to me that someone had to try to do it. To do the demonstration – to demonstrate what we can do with solar boats.”

OO: Were you sure it would work?

OO: You describe yourself as an “eco-adventurer”. Explain how you define that term.

RD: “For me, there is a big difference between an adventurer and an eco-adventurer. When you are an adventurer, you do something more for yourself. You want to climb a peak; that’s for you. And when you are an eco-adventurer or an eco-explorer, the goal is something for the common interest of the civilization – of the planet. This is, for me, the big difference. The main goal of the project is to protect the environment – to learn about how we can protect the environment and protect this planet.”

OO: What other eco-expeditions have you been on?

RD: “This was the first one, you know. There are not a lot of eco-explorers at the moment, because it’s a new job!” OO: Before you set out on the PlanetSolar expedition, what did you have to do first to make sure the expedition was realized?

RD: “When you have an idea, it’s nice. But first, it costs a lot. You’re not sure if it’s possible. And I was not famous. And I didn’t have any money in my bank account for this project. So, what we did: the first step, it was to check if it’s possible. So, we ask one school to make a study to check if it was possible or not. That was the first point. Second point: for me, it was clear that if I wanted to find some money, I need to have some famous person with me in the project. So, I asked some people – some godfathers – not to give me any money, but just to borrow their name for the project. And then you have to be really ambitious. You have to try every day. For four years, we tried really hard to find the money. And then we were lucky one day. We found the fund source who decided to finance the construction of the boat. That was Immo Ströher and ImmoSolar. But it took four years.”

OO: How long did it take to build the yacht?

OO: How did it feel to finally get underway on Tûranor?

RD: “It was amazing to have a chance to be on board PlanetSolar. Because when you look for the money for four years, then you do the studies and build the boat – that’s two-and-a-half years. That means, when you start, there is already six years of work behind. And you are the first. Every hour, every meter, you are the first. So, we learned a lot.”

OO: What was the experience of sailing around the world like for you?

RD: “It was amazing to go around the world on this kind of boat. Everywhere we have been, the people, they want to know more about this boat. And the welcoming was always nice. In the Pacific, we got a lot of ananas (pineapples), bananas.
“In some places – in the Marquesas Islands and Tonga – we were the biggest solar generator of the whole south Pacific. But it was a boat. It was all pretty crazy.
“When I was young, my dream was to be an astronaut. And when you sail from Galapagos to the Marquesas Islands, it’s 6,000km (3,700 miles) in the middle of nothing. You know, you’re in the South Pacific. There is nobody. You don’t see any sign of life – no sign of human life. And during the day, you have the wind and the sun and you recharge the battery. But at night, you are just under the Milky Way and the showers of météore every two minutes. And you can see that you are a space shuttle between planets. It was amazing.”

OO: What sorts of problems did you experience along the way?

RD: “That’s the really amazing thing about this adventure. On board of PlanetSolar, we had two types of technologies. New technologies: solar cells, battery, computer. This was something very special on board of PlanetSolar. And old technologies – the ones that you find on any boat: toilet, shower, water pumps and propellers. And guess where we had the problems with these two: Only with the old-fashioned technology! The toilet was broke. Shower doesn’t work. Water pump stops. And we lost twice the propeller. The pitch-control of the propeller was not working anymore. The battery was full of energy, but if you cannot move the propeller, it does nothing for the boat…Both times, we made it back to port by ourselves and waited for the German team to come in to fix the problem.”

OO: Of all the places you visited along the journey, what was the one that affected you most?

RD: “I think, for me, one of the best stopovers for me was Marquesas Islands, because they understand that something has happened to the climate. And we were there with this huge boat and they were just happy to see that we can do something – that someone is trying to protect the planet and protect their islands.” OO: What did you prove to the world with this project?

OO: What are the practical applications of solar energy on superyachts?

RD: “You know, the concept of PlanetSolar, it was to do this tour in the most difficult conditions. Only with solar. But because it was an expedition, it means that, if you use other sorts of energy – for example, the wind, or maybe hydrogen or maybe you have a small generator – you can do a lot. You know, PlanetSolar went around the world with only the power of one scooter. We used 30-hp to go around the world. Why? Because we have a very efficient boat. And, I mean, this is what we can do. First: efficient boat – light. And then to use a part of solar energy, part of the wind, maybe some hydrogen, and then we can have a very nice boat, very efficient, very fast, who is saving a lot of energy. So, we don’t want to say can do everything only with solar.
“With the big, big boats, we have another problem with solar energy. When they start to get too big, it doesn’t work anymore with solar. Or the part of solar will be very small…The bigger the boat, the more weight you have for one square meter of solar cells and it doesn’t work anymore. When it gets too big, solar energy can be only a part of it. Not the whole thing.”

RD: “Next is to share this adventure. We are doing a book and a documentary of 52 minutes. But we want for everyone to share this amazing project with us. And I have a new idea that I will start next year – a new project that is too early to tell you – but a new project, a solar project, that is more ambitious.”