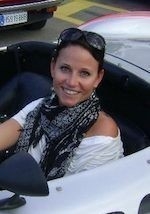 She may be small in stature, but that hasn’t stopped Erica Lay from doing some very big things. Only recently, Lay launched her own international yacht crew agency – the Erica Lay Crew Company – in Palma de Mallorca. But like so many, she got into the industry “purely by accident.” What started out as a "year out” working as a dive instructor in The Bahamas with a shark wrangler, turned into “a fairly grown-up job” eight years later – which seems to have come as a surprise to her as much as anyone.

Lay grew up in the middle of the United Kingdom – in a village called Stoke Mandeville, in Bucks. Despite its distance from the sea, Lay was a waterbaby – apparently undeterred as a small child by either fear or even the inability to swim. She quickly learned to swim after her brother recovered her from the bottom of the deep end a couple of times, she says.

Following her lifelong fascination with sharks, Lay moved to The Bahamas where she worked with a shark wrangler. “Sharks were always a fascination since I nagged my mum into letting me watch ‘Jaws’ as a child and then hid behind the sofa for the entire movie, absolutely terrified,” Lay says. She was doing some deep technical dive training in Mexico when her PADI course instructor told her she’d be perfect for the job in The Bahamas.

That’s how she ended up working with superyachts – by way of sharks. Since then she’s worked in crew recruitment and recently launched her yacht crew agency. In her spare time, the 34-year-old works on a book based around her life – “so, yes, a comedy,” she jests.

In answering our Q&A, Lay told OnboardOnline of her love for the classic Disney movie, “The Little Mermaid,” her passion for viewing sharks close up and on their turf, and about how she almost went into stunt work. Purely by accident…I was working on a “year out” as a dive instructor in the Bahamas with a shark wrangler and it just sort of happened. As such, I find myself still on that “year out” eight years later but with a fairly grown-up job now, running my own international yacht crew agency in Palma de Mallorca.

Yes.  Up and down, fast-moving and with hilarious stories at every turn. You really can’t make this stuff up. It’s brilliant.

Meeting so many interesting and different people and hearing about everyone’s experiences.  I love helping people find the right job and helping clients find the right crew.  It genuinely does give me the warm and fuzzies.  Please don’t be sick.

If I didn’t work in yacht recruitment, I would most likely have gone into stunt work (Yep – I nearly pursued that before I came to Mallorca). Or maybe I’d be a full-time writer?  Or maybe I’d be an actress.  Or a food critic.  I like food.

Being on a sexy, super-fast sailing yacht. Drinking a cocktail with someone else doing all the work ideally.

One of the cays in the Exumas.  I’m not fussy…there are plenty to choose from.

I already have – here in Mallorca. Working with film crew, stunt teams and meeting some awesome shark scientists.  And all the laughs I’ve had with my crew.

Having to pin down a co-worker to rip a ring off her finger after an accident. Her finger swelled up and she would have lost it had I not done it.

The sheer, immense power it holds.

Coming face to face with a great hammerhead whilst diving alone on a deep tech dive in a secret location on the Tongue of the Ocean in Nassau.  He was young, curious, and absolutely enormous with the most beautiful prehistoric looking dorsal fin that seemed nearly as big as I was.  It was a very peaceful moment and made me feel absolutely tiny and completely exhilarated.  Yes, I probably was narced. It was pretty deep but I still maintain he was huge.

Tricky question.  On the one hand, a sexy fast-sailing yacht is cool… but then again, I’d be tempted with an expedition vessel kitted-out with lots of treasure-hunting equipment and dive gear to go exploring…It would also need a large shoe rack and a large wine fridge.

There is nothing outside of yourself.  Look within.  (See? Sometimes I can be quite deep.)

Honesty… and a good sense of humour helps.  You’ve got to be able to laugh at yourself.

My family for putting up with me and inspiring me to follow every crazy dream I ever had.

Probably being the only (and smallest) sharkfeeder operating in the Bahamas at the time.  Or possibly drinking my own height in Guinness at the last Ireland rugby match?  No – I´ll stick with the shark thing…Or maybe seeing James Bond naked on a film shoot?

I live by the mantra of no regrets.

Who knows?  If you’d asked me that five years ago, there’s no way I’d have said living in Mallorca running my own company.  But let’s go for: circumnavigating the globe with some amazing people who are equally silly, and probably still trying to write a book.