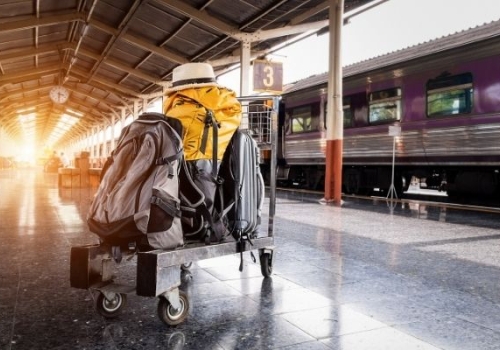 Last month the crew on the 31m MY La Dolce Vita had to abandon their burning yacht off the Florida Keys before fire totally gutted it and the yacht sank. Other than the watches on their wrists and the smart phones in their pockets, they may not have managed to take many other of their personal belongings with them when they abandoned the yacht.

This was not a unique occasion when yacht crew have been unexpectedly separated from their personal effects in a traumatic manner. A brief online search will reveal a series of other yacht fires and founderings, including some very large yachts. Recently, the 75m SY Enigma burned out and sank off Langkawi. The 60m MY Yogi sank in heavy weather in the Aegean in February 2012.

The Yogi episode was spread over several hours before the crew were lifted off by helicopter, and they reportedly had time to assemble all their belongings to take with them. In other incidents the speed of abandonment was such that few of the crew members’ personal effects left with their owners. Bicycles, surfboards, parachute packs, and even laptops are unwelcome candidates as survival equipment in a life raft.

The above examples illustrate one category of separation between crew and their possessions, namely accidents to vessels. Accidents to individuals, leading to unexpected hospitalisation and/or repatriation, are another category. Fatalities, occurring either onboard or during the period of service, are a third category.

The Covid-19 crisis has brought to our attention a fourth category of enforced separation of seafarers from their belongings. A combination of quarantine/isolation/lockdown restrictions, plus limited or total unavailability of air travel to particular destinations, has meant that some of our PYA members have been unable to rejoin their yachts after a period of leave and have consequently been paid off. The return of their belongings has not always gone smoothly.

The foregoing serves to show that there exists a niche area of crew welfare which is often overlooked and unprepared for until a critical situation arises. Whenever seafarers are separated from their onboard personal possessions for whatever reason, there are specific regulations and protocols to follow. The particular duties and responsibilities of owners/managers and masters, and the rights of the seafarer concerned, will be found in the flag state shipping regulations (for instance the UK Merchant Shipping (Maritime Labour Convention), (Minimum Requirements for Seafarers etc.) Regulations 2014, Part 6). In some instances the seafarer’s rights under such regulations may be embodied in, appended to, or referred to in the SEA.

With regard to the UK Statutory Instrument referred to above, note the following paragraph: (13) The seafarer or the next of kin, as the case may be, must reimburse the shipowner for the reasonable delivery costs if demanded.

A similar clause may be found in the regulations of other flag registries. There is no guidance as to the grounds for reimbursement of such delivery costs. Justifiable grounds could be extreme misconduct on board, leading to instant dismissal and police escort to the airport, or criminal conduct leading to imprisonment under the regime of the port being visited, such as possession of drugs or pornography.

No matter who pays for the shipment, a proper accounting of all left-behind possessions is called for in all circumstances. In the event of personal belongings having to be shipped to a former crew member, or their next of kin, the circumstances leading to separation from those belongings, whether fire, foundering, sickness, injury or death are certain to create stress for those involved. The last thing that anybody needs is to compound the stress by controversy over the belongings which have been left behind on board. The best precaution to take in order to avoid dispute over such possessions is to maintain on board an electronic register into which each crew member can enter all relevant details regarding their personal belongings.

Entries should include a photograph of each item (face and back of the case of expensive watches,) photograph of proof of purchase, make, model, serial number, a brief description, and any other pertinent information (such as provenance). The electronic format allows for easy updates as crew change or they buy themselves new toys, and remote cloud storage safeguards the list in the event of catastrophic annihilation of onboard records.

The full list should be password protected, with at least one person ashore, possibly the DPA, having access. With this data always retrievable, appropriate action can be taken in the event of shipment of one person’s belongings, or a post-loss insurance claim by all crew members. If no central registry is kept on board, it would behoove each individual crew member to maintain their own personal inventory in a similar remotely stored manner. In all instances, the master or a delegated officer should verify the existence of all items listed.