Withholding tax of up to 33% is being applied to charters in some EU countries and Sarnia Yachts is urging yacht owners to consider restructuring arrangements to avoid being caught out.

Yacht owners established in territories such as Cayman, BVI, Isle of Man, Guernsey and Jersey could be liable and the list of countries currently applying this tax includes France and Spain, with more countries likely to come online shortly.

Spain and France implement the tax in different ways, however, they both trigger the tax when the yacht-owning company is established in a territory without a double tax treaty with the country where the yacht is put at the disposal of the charterer.

The French tax authorities are now applying the tax to the balance of funds after deduction of commissions transferred from French businesses to yacht-owning companies from non-tax treaty territories. The French management or charter company is responsible for paying the withholding tax to the French government. In Spain and the Balearics, withholding tax has been applied since 2014 and is collected by the fiscal agent who has been appointed by the yacht owner as part of the pre-requisite arrangements before any yacht can commence charter operations.

Demands by the French authorities have reached into the millions of euros, and this has had a detrimental effect on French businesses. The ECPY and MYBA are negotiating on behalf of the brokerage community, addressing this issue in the highest French courts on the basis that it is yacht owners who should be liable for these taxes and not the French charter and management companies.

Sarnia Yachts advises that migration of the existing yacht-owning company or establishing a new company in a more favourable jurisdiction that does not trigger withholding tax issues is now a preferred option.

Malta should be considered as a territory for migration or to set up a new yacht-owning company and Sarnia's Malta office is on hand to help with such matters. Other factors to consider in the restructuring arrangements include:

Looking ahead to the 2017 season, any yacht owners concerned about how withholding tax might affect them should get in touch with Bruce Maltwood or Darryl Sharman 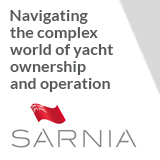