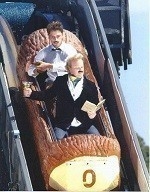 Don't get me wrong, I like some aspects of the north of England, it is just that I like the benefits bestowed by electricity. Some beers are quite decent, and it was once sunny for an hour when I was near Leeds, but that's about all.

They say the only good thing to come out of Yorkshire is the M1, but unaccountably, there are loads, maybe even dozens of people that actually like it!

Of course that bizarre concept does not taint anyone whom was born south of a line between the Bristol Channel and The Wash, it afflicts only those unfortunates born north of the civilisation line, as I like to call it.

I just mentioned the Wash. This seems to be an alien concept to those who entered this world north of that line. I suppose it must be something to do with all those coal mines they have or had up there. That and the mess that must be made when cutting the peat for their fires and I guess the permanent smog cannot help. At least that might help the tundra to soften up in the summer months. That is another alien concept. Summer in the north of England. As alien a concept as having a synagogue in the Yemen. There are those that live amongst us, and I expect to hear some response from some of them, well, those that can read and write, over the coming weeks, who actually enjoy the permanent damp, the winter gloom and all the culinary delicacies that epitomise the region. Take tripe for example. I would not, but to a man, they all do, regularly. Lard is another disgusting local product, but I suppose they have to have something to make the road kill cooked on open fires in big pots taste better. Then there is something or somebody called The Yorkshire Pudding. Moving onto dogs. Any that survive being eaten are probably not worth the effort. Whippets, a favourite amongst the upper classes up north, do not have enough meat on them to feed a mouse, but I hear many keep them, I suppose hoping they will fatten up, ready for the pot. They have lots of bad dogs up there. They must have, because they are always going on about sheep dog trials and the like, but I wonder who they get to defend them?

Then there are pigeons. They are kept in pigeon lofts, and although they probably perform a useful task in the sending of messages, I do not understand the universal love for then that one sees up there. I once took a photograph of a pigeon feeding area in Chester: a novel way of trapping them I agree, but what if the pigeons can't read and don't know where to congregate? I don't think they have thought that through properly. It is not just their love of the pigeons, the food, the climate, the tundra, the animal husbandry, the gloom and the smog that amuses me; it is the very fact that they are prepared to defend the indefensible. They can also often be rude about the obvious benefits of being born in the civilised south. Chichester or Cleethorpes? Is there really any contest? That's another thing, the names of places up north compared to the south. Brighton versus Scarborough for instance? Bright or scarred?

I suppose it has to exist, and continue to exist, if only to give us in the civilised south context to our lives. The starving and disadvantaged in Africa are somehow a long way away, whereas the reality of the north is all too close for comfort for us superior southerners. Anyone good Samaritans out there up for putting in a good word for those chaps up north?

It all started in about 1973 after I’d left Aylesbury Grammar School and turned down a place at University to become a dustman.  My mates such as John Otway, Wild Willy Barrett and musicians that went on to form Marrillion had nowhere to play, so I set up a gig, which multiplied into promoting 7 gigs a week. Amongst the bands booked were The Jam (paid £20) The Clash (their first gig outside London - £50), the Damned, The Only Ones, Eddie & Hot Rods, XTC, Stranglers- and many more.

Many years later, after a career in artist management that involved Prince, James Brown and Rolf Harris, I act as the Director of Steve Marriott Licensing Ltd, the company I set up to administer the rights of the late Steve Marriott, founder member of Small Faces and Humble Pie.

I now also write a daily blog called www.valbonnenews.com, a daily insight into the lives of the idle rich in Valbonne in the south of France where I live for part of the year. The column has spawned two books, the latest of which is called The Valbonne Monologues.  I also work with Currencies Direct and have also written articles for a number of publications including the Daily Telegraph.