Industry » 'One and All', by the Fisherman's Friends
« BACK

'One and All', by the Fisherman's Friends 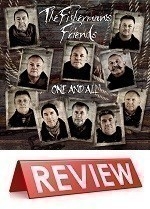 Port Isaac in north Cornwall is best known to many as Port Wenn, the fictional fishing village and home to the cantankerous Doc Martin, played by Martin Clunes in the hit TV show.  However, the beautiful natural cove is also home to another local gem.

The Fisherman’s Friends, who recently released their new album, ‘One and All’, are torchbearers of a centuries-long tradition of unaccompanied public singers belting out folk songs and shanties in seaside taverns.

Indeed, if you stroll into the local Golden Lion on any given Saturday, you’ll probably find at least one member propping the bar, sipping on a pint of Doombar. The 10-piece shanty group are largely responsible for re-popularising an age-old tradition, bringing folk music to new audiences.

Many of these shanties are rooted in old work songs and naval chants from the age of sail, the call and response providing a steady rhythm to haul or heave against in unison, shaking the monotony of the backbreaking work above and below deck.  Although their set is typically performed from the comfort of the foreshore, the sea is truly in their blood and their wellies; lots of the yarns they perform were collected by various members across globe during their youth whilst crewing and, of course, out fishing.  Whether lobster fishermen, volunteer lifeboatmen or casual weekend sailors, all share an affinity with the sea. Listening to them in the flesh is a primal experience; simple, repetitive melodies and rich harmonies punctuated by howling, hollering and grunting.  Through their bawdy, lewd tales - gusto often taking precedence over technique - they quickly built a name for themselves on the local circuit, becoming a hit with the tourists who flock to the Cornish coast in the summer months.

What began as a bit of fun, a way of letting go after a busy week lobster fishing, soon escalated until crowds gathering on ‘the Platt’, as the foreshore is known, would regularly swell into the hundreds, sometimes over a thousand, with rows of onlookers overspilling into the picturesque backstreets and lanes snaking up the cliff.

Since landing a £1 million record deal with a major label, they have performed at Glastonbury, the Royal Albert Hall and picked up The Good Tradition Award at BBC Radio 2’s Folk Awards.  A movie is even in the works from the director of Calendar Girls.  Not bad for ‘a bunch of hairy-arsed Cornish fishermen, potters, builders and bakers with a collective age of 561’ (to use their own words). The band’s new album is tragically overshadowed by the death of tenor Trevor Grills, who was killed along with the band’s manager when part of a stage door collapsed whilst out touring the UK last year.  Their recent book, Sailing at Eight Bells, is rife with cautionary tales of close friends and family lost at sea.  With all members having volunteered for Port Isaac’s lifeboat service at one point or other, risking their lives trawling the rugged Cornish coastline, it is a bitter irony that they should lose a member on dry land in such a way.

The album’s title, ‘One and All’, derived from Cornwall’s coat of arms, is both a tribute to Trevor Grills and a show of solidarity amongst the surviving members.  In a small consolation for the band’s followers, recordings were finished just weeks before the accident.  Hence Grills’ presence is felt throughout the record, not least on lead single, Mary Anne; a fitting tribute to their childhood friend.

On record, and in the hands of producer Rupert Christie (whose credits include U2 and Lou Reed), the rough edges have been sanded down somewhat and polished with a studio sheen.  The album is largely a continuation of the formula of their eponymous major label debut.  Anyone expecting a radical departure venturing into dubstep or doom metal will remain disappointed.  Instead there is the familiar selection of traditional sea shanties, such as live favourite, Nelson’s Blood, mixed with a few new compositions thrown in to provide some pop sensibility.

The sweetly-sung ‘The Last Leviathan’ which laments the death of the last remaining whale is a true highlight, showcasing a more reflective side.  Sample lyrics ‘Last night I heard the cry of my last companion... now I know I soon must die’ are particularly resonant, given the events that would follow. Elsewhere Christie’s arrangements are perhaps a bit busy; the array of woodwind, strings, horns and crashing symbols - although frequently rousing - is a far cry from the group’s rusty a cappella beginnings.  Sometimes it works and sometimes it doesn’t.  The incessant recorder noodling can begin to grate, distracting rather than complimenting the vocals, seemingly added to provide a ‘folk authenticity’, but often superfluous.  Meanwhile, the original compositions occasionally veer towards middle-of-the-road Americana and soft rock territory, which seems at odds with their rootsy, English ruggedness.  Nevertheless there is plenty on offer here to both satisfy existing fans and also win over some new ones.

What the future holds for the Fisherman’s Friends is currently uncertain.  At time of writing it is still less than a year since Grills’ death and they have not performed publicly since.  However with the feature film due to begin filming shortly and the surviving members vowing to continue on, this would suggest there is still more to come from the old dogs yet. ------------------------------------
Felix is an editor of books and a freelance writer with articles published across a range of media.  Growing up on the south coast of England, his formative years were spent living on a converted Dutch barge, while most of his teenage summer months were spent scrubbing decks.  Over the years he has lost at least four mobile phones to the Hamble River and had at least one encounter with Solent Coastguard.