Industry » Features » Does Yachting Need to Get Ugly?
« BACK

Does Yachting Need to Get Ugly?

Some years ago, a story did the rounds of the yachting community about a Caribbean crew agent who told a prospective stewardess that she shouldn’t waste her time looking for a yacht job, as she wasn’t attractive enough. This caused a fair bit of discussion - as to whether it was fair, whether the agent should have said it, whether the crew agent was in fact being cruel to be kind.

What I didn’t hear though, was anyone saying there wasn’t any truth in what she said.

This is self-evident: One only has to walk the docks for a morning, or spend an evening in a yachtie bar to realise that yacht crew tend to be well above average in the looks department.

It’s not as if this happens by accident; that there are captains all around the world looking at their crews, scratching their heads and thinking, ‘I just don’t understand why my crew all look like they fell out of a catalogue.  Every year, this happens. Just awful.’

There is a selection process going on, based - if not on outright beauty - then at least on the minimum consideration that the crew look rather smart in a polo shirt.  This is an industry where we have photos on our resumes, after all.  Image matters.

This seems rather obvious.  So obvious, in fact, that I was puzzled to see an editorial in the Crew Report which seemed to argue that personal appearances were not a major factor in yachting.  In an article about the need for better marketing of the yachting industry in light of increased media attention, the editor argued,

“Appearance is hugely important in our industry.  Not physical appearance, as one other publication recently proclaimed very distastefully, aiding this industry in absolutely no way in this goal of better marketing.”

My word.  Because the article didn’t reference the publication with the ‘distasteful’ article, I spent a fun-filled afternoon trawling through back-issues of yachting magazines, to find out what might have provoked such a reaction.

There’s not a lot written in the yachting media on this topic, I suspect because it is a no-brainer to anyone who has seen the hordes of beautiful yacht crew stampede into Antibes and Fort Lauderdale each season. The only article I could find on the topic in the last year was , ‘Hey Good Looking’ in Onboard Magazine (no association with this website), which concluded in light hearted fashion, “Yachting is fattist, sexist and looksist…This is a glamorous industry and we all have to look the part; if you don’t like it then work ashore…” 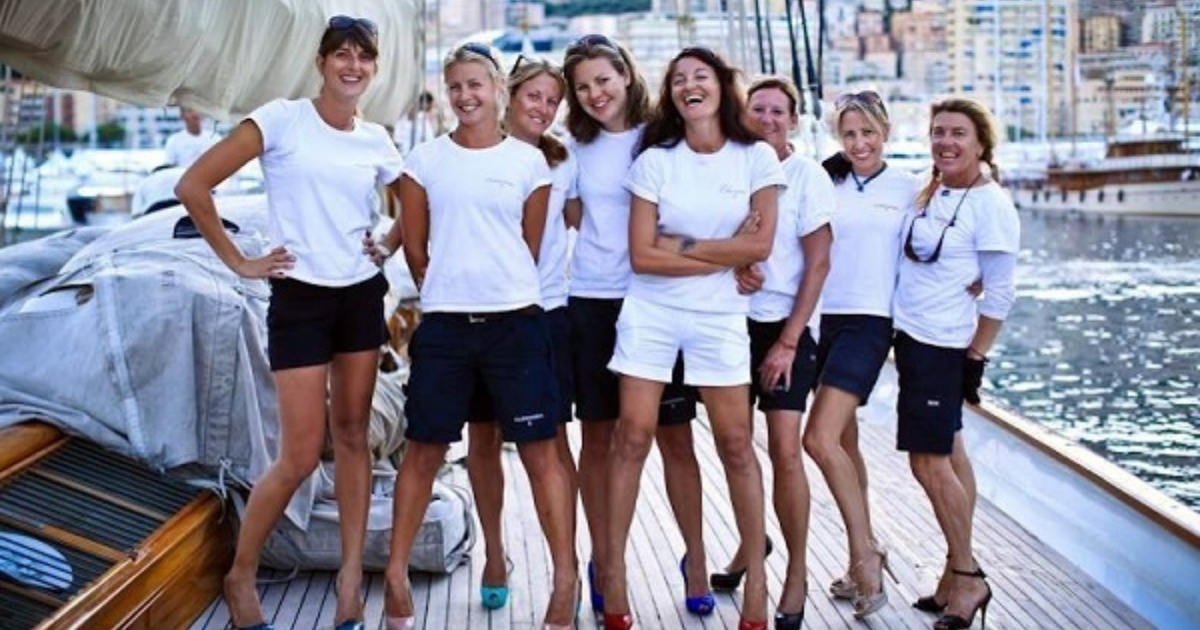 The article is a bit flippant, perhaps, but the conclusion is sound - yachting is a glamorous industry and most yacht crew, male and female, are overwhelmingly chosen to look a certain way, regardless of how politically incorrect that may be.

So, where are all these good-looking people coming from?  Who is driving this selection?

They are the ones doing the hiring.  Should the ‘blame’ for hiring only gorgeous crews be laid at their feet?

Admittedly some captains take to this aspect of the job with what can only be called relish.  One captain, upon being told there was a stew waiting on the dock for an interview, replied, “Is she a minger?  I’m not having some fat ass bending over vacuuming the bridge in front of me.” I can’t pretend it’s the only captain I’ve heard talk like that, either, although most certainly not all do. 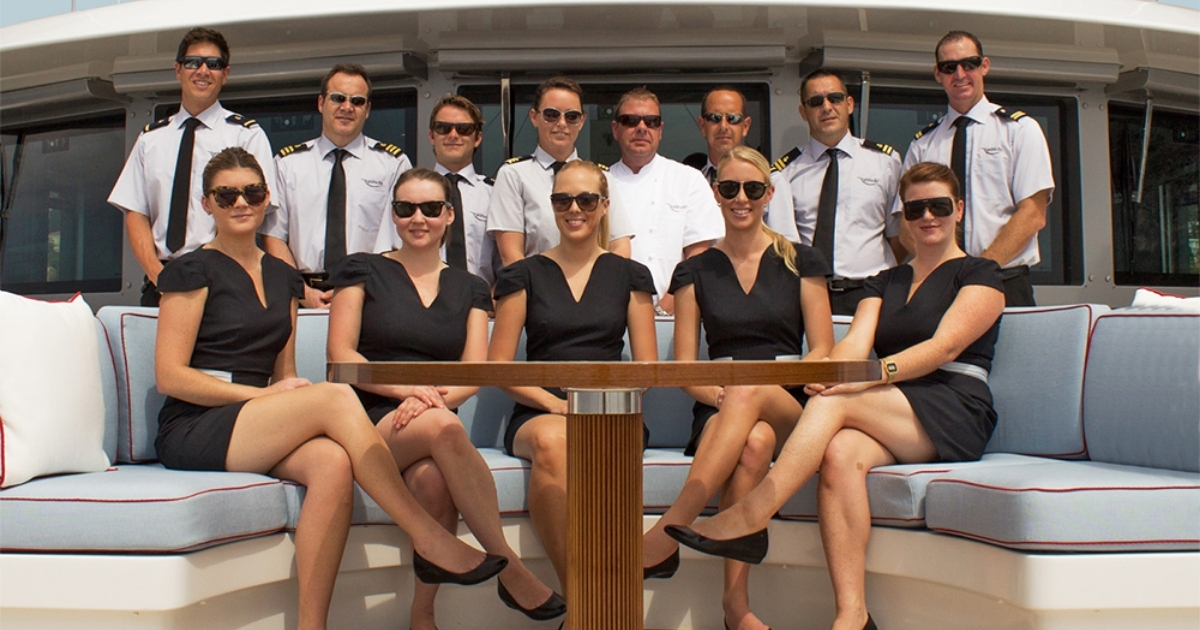 It’s fair to say, I think, that captains don’t hate having pretty girls in their crew.  But then, deckhands are generally good-looking as well, and I’m assuming that the majority of captains are not gay.

If we stand by the argument that captains hire pretty girls just for their own aesthetic enjoyment, then we’d have to assume that the male crew would be average-looking.  But they’re not.

Which of course leads to the real issue: most captains hire good-looking crew because they know what their owners want.

Superyacht owners appreciate aesthetics, and they spend tens of millions on their yacht’s design. For the most part, they want their crew to complement the aesthetic of their boat, and it’s reasonable to assume that charterers also expect a certain look from the crew. High performance, modern, beautiful boats get fit, young and attractive crew to match them.

Good-looking yacht crew is the industry norm, and I believe that yacht owners and guests would be genuinely surprised if they turned up to their yacht to find it being run by a group of people who represented a cross-section of  humankind.   If the Crew Report thinks you can take a random sample of 20-50 year olds and they'll all come out looking like yacht crew, then they’re in for a rude shock next time they go outside. 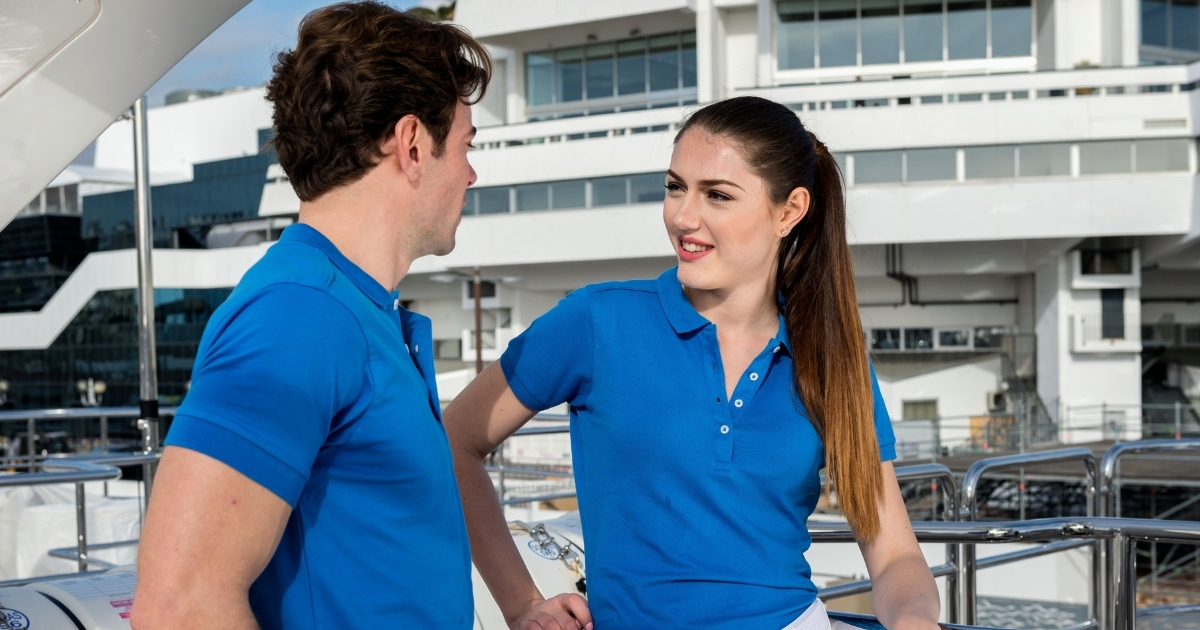 Some might argue that they’ve worked on boats with an average-looking crew.  Well, firstly, I don’t believe you.  I recently had the dubious pleasure of taking a bus in rural England and, as I watched a pimply young fellow surreptitiously wipe his snot on a pole,  it reminded me that our perceptions in yachting become skewed as to what the average person really looks like.  For example, the average woman in England is a size 16, and I’ve never seen a size 16 stewardess.

Secondly, while there certainly are crews that are less good-looking, that is also often by design - to placate the insecurities of an owner’s wife, a captain’s wife or a brittle chief stew.  But remember, that boat is still hiring crew to look a certain way (in this case non-threatening), and therefore still hiring based on appearance.

There may be boats out there where neither the owner nor captain give two hoots what the crew look like, or how they reflect on the image of the yacht.  Keep a lookout for that boat; it goes by the name M/Y Not Very Likely.  You might think that racing sailboat crews might be exempt from being hired on looks, given the focus on sports skill, but I’ve been to a regatta or two in my time, and that’s just not the case.

For most entering the industry, crew agents are the gatekeepers and, let’s face it: they often judge how successful a new candidate will be in the industry by how they look.

One woman who was seeking her first stewardessing position was told by an agency that there were no jobs available for green stews, only to see a stunning stew with not a day’s experience walk in to the office after her and get put forward for three jobs. Ouch.

If the crew agencies are only feeding through attractive candidates, then of course the captains hire attractive people. They have no alternative, poor dears.

But can we really blame the crew agencies for that, or are they just reacting to the industry’s expectations?  To belabour the point, crew agents tend to select on looks because that’s what captains and owners tend to demand.

Crew agents field all sorts of undiplomatic requests from captains, generally on behalf of their owners.  One agent told me, ‘One of the yachts will only hire blondes with big boobs, and we sometimes receive quite specific requests about how the girls should look.  The guys too, sometimes.’

Over the years, crew agencies have become very good at knowing what the yachting industry expects.  That’s not to say that they won’t put less attractive candidates forward, but simply that they know the kind of boats that will consider those candidates, and the ones that won’t - i.e., the majority. They know the formula, they know their business.

It is important to note here that this kind of appearance-based selection is much more prevalent for junior positions, where there is little to separate one candidate from another.  If both have experience, and both are pleasant and enthusiastic, and one is just much better looking than the other, then chances are that a captain will pick the more attractive candidate. 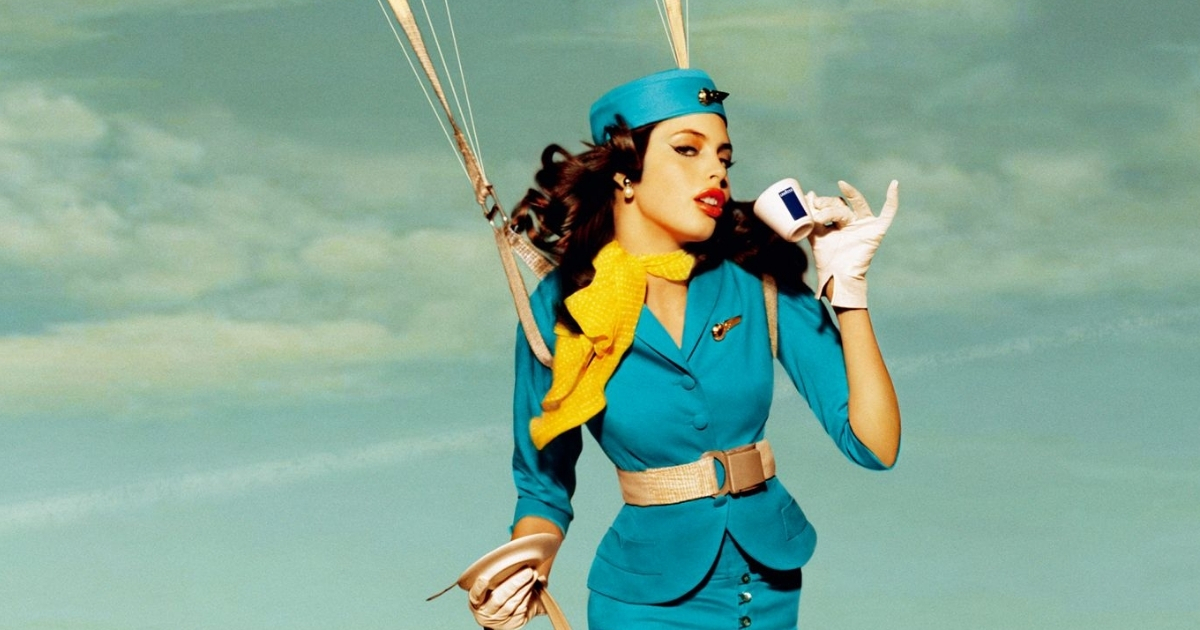 This is just as true of the ‘real’ world as it is of yachting. Countless industries hire based on looks- flight crews and bar staff being excellent examples, not to mention promotion girls, sales staff, receptionists…the list goes on.

Yachting agencies and advice sites may not be able to say on their websites, ‘Don’t apply if you are ugly’, but it doesn’t take much to crack the code.  Yachting sites tend to use words like well-presented, immaculate, well-groomed, neat and tidy… all of which are just a thinly veiled way of saying, ‘we judge on looks’. That’s in case you missed the rather large hint of them insisting on supplying a photo with your CV.

Less attractive candidates, given perseverance and a great attitude, will find jobs in yachting, eventually.  They just have to try harder, network more, be nicer, and watch a lot of people get hired before them.  Life isn’t fair, and neither is yachting.  What also isn’t fair is pretending that looks don’t matter in an industry when they so plainly do.  Reality must be faced.  To hide it does a disservice to those who are considering joining yachting and want to know the truth of it before they spend thousands on courses, flights and accommodation.

This is a good-looking industry. That is nothing to be ashamed of, nor proud of.  It is simply what it is, driven largely by owner’s preferences, and therefore unlikely to change.  What is a concern, however, is a yachting publication presenting a politically correct, sanitized version of yachting that does not exist.  By accusing another publication of damaging the image of yachting by writing an article saying that looks do matter, The Crew Report veers away from journalism into the field of PR.  The job of a journalist is not to ‘market’ the yachting industry, or ask anyone else to.  It is to report it.  The good, the bad- and the ugly.