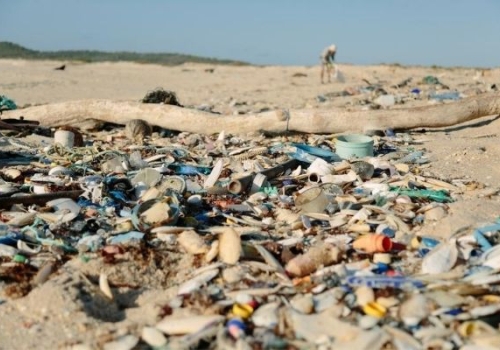 Demonstrating what can be achieved when you unite to protect the oceans and marine life, Sea Shepherd and the Rangers from the Dhimurru Aboriginal Corporation of Northeast Arnhem Land joined forces for a second clean-up campaign at Djulpan, a remote beach in Arnhem Land in the Northern Territory. Together they removed over a tonne of trash a day.

Around 2.5 hours from the nearest town, Djulpan is culturally significant for the Yolgnu people but tragically, this isolated and beautiful stretch of coastline is inundated by marine plastic pollution. This area along the western side of the Gulf of Carpentaria is also an important nesting ground for six of the seven species of marine turtles which are listed as either endangered or vulnerable.

When the Sea Shepherd crew and Rangers returned to Djulpan for the second year, they were more determined than ever to free the sacred shoreline of Djulpan of trash. Despite the heat and long days together removed 12.1 tonnes of debris including consumer plastics and large fishing nets from 8.5 kilometres of beach.

Most surprising to the team on the first day was the astonishing sight of Djulpan covered with dozens and dozens of turtle tracks and nests. Seeing so many turtle nests along areas of Djulpan cleaned the previous year demonstrates that beach clean-ups make a direct difference for marine life.

Sadly, whilst cleaning up the beach the crew came across a number of turtles that had died as a result of debris and female turtles coming ashore to lay their eggs were documented navigating through plastic debris as they dug their nests. This shows the devastating impact and consequences that plastic is having on wildlife.

While seeing all this plastic is devastating, it also shows that beach cleans are a key strategic tool in reducing plastic accumulation and giving protection to marine life in remote coastal areas.

For Sea Shepherd, with its partnership with Dhimurru becoming stronger and the cultural and environmental outcomes becoming greater, the team is hoping to be able to return to Djulpan in October 2020  to achieve even more together.

Watch a video on the clean-up here