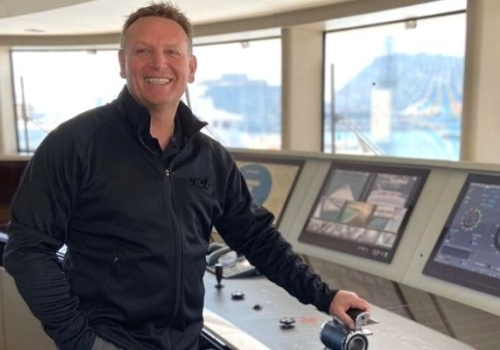 Captain Nicholas Doyle is a man of many talents. Following a brief stint working in a casino, the sea called his name and he responded. Having started his journey in sailing and racing yachts in the UK, he packed his bags and moved to Europe where he worked his way up to captain some of the best known and most popular charter yachts in the Mediterranean. When he’s not behind the wheel of a luxury superyacht, he’s rebuilding classic sports cars and flying aeroplanes and helicopters.

Here, Captain Nicholas talks to us about his love for yachting and the sea, his family, his passion for naval history and of course, his interest in all things flying.

Tell us a little about your background: where did you grow up and how did you end up going into yachting?

I was born and raised in Scarborough, North Yorkshire. It’s a famous Victorian seaside town known for its tourism and fishing industry. At one point I was working as a croupier at the local casino, so looked at going to work on the cruise ships. I sent off for some information and I received a couple of books, one for cruise ships and the other for yachting.

The yachting book was so much more interesting. It suggested that to get started in yachting, one should begin by learning to sail, learning the equipment and how to tie knots. Luckily, Scarborough has an active sailing club, so I participated in local cruising and racing with the local fleet while finding out how I could make it a career.

I saw an advertisement in a yachting magazine (long before the internet) about the first professional crew training course in Cowes. I went to the London Boat Show and met a lady called Cyd Mansell who was representing what is now the UKSA. Cyd was instrumental in starting my career and became a lifelong friend.

I sold all my possessions, took out a career development loan with the bank and moved to Cowes for three months of training. Soon afterwards, I travelled to Antibes by bus and started dockwalking where I met Harry Molenaar, my first captain. Harry hired me in the Summer of 1996, and my yachting career had finally began. Sadly, Cyd Mansell passed away recently.

You spent the peak of the pandemic on board - what were some of the challenges and did you feel prepared?

Leading up to what we now know as the ‘lockdown’, it was becoming evident that there was going to be a shortage of particular products and foods due to the logistical chain being severely disrupted. We increased items that we could freeze and dry store, as perishables were becoming harder to purchase. By the time lockdown arrived, we were fully prepared and ready to ride it out. 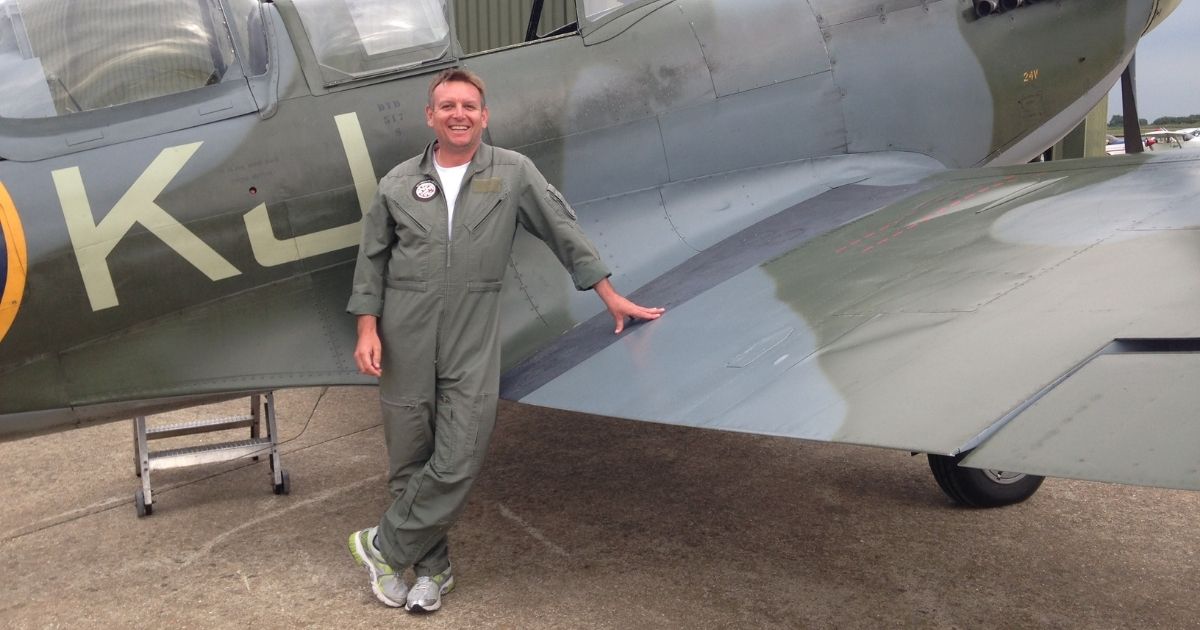 What were the greatest challenges relating to your management of the crew in this period?

I’m sure all captains would agree that the biggest challenges were morale and mental health. Keeping the crew busy during this time was of paramount importance. We developed projects and set routine tasks to help them remain focused on the workday.

In the evening and over weekends, we hosted crew quizzes, painting workshops, pizza making, BBQs, theme nights and even movie nights in the cinema. We purchased more sports equipment and set them up in different locations on the yacht, including the guest gym. There was boxing training, CrossFit, rowing, treadmill, cycling and yoga classes. We also bought a ping pong table, plus a plethora of other sports equipment. Some crew started learning other languages, photography, musical instruments and online training via Teams or Zoom. All of this kept the crew engaged and supported their welfare as a whole, which kept moral high.

You have captained one of the most popular superyachts on the Mediterranean circuit - what were some of the highs and lows during that time?

For me, the highlights are always our guests’ first experiences. For example, their first time going through the Corinth Canal, or the Suez Canal. Arriving in Malta, or in Bonifacio. Going up the river in Sibenik to the Krka Falls. Watching fireworks while anchored in front of Monaco. Arriving at crystal clear anchorages in Greece and tying up to the rocks. Or even just seeing drone footage of the yacht underway. These are just some of the many amazing guest moments that stick in my mind.

The biggest lowlight was in 2008 when the financial crash happened and we didn’t know how the industry would recover from it but, amazingly, it bounced back even stronger. 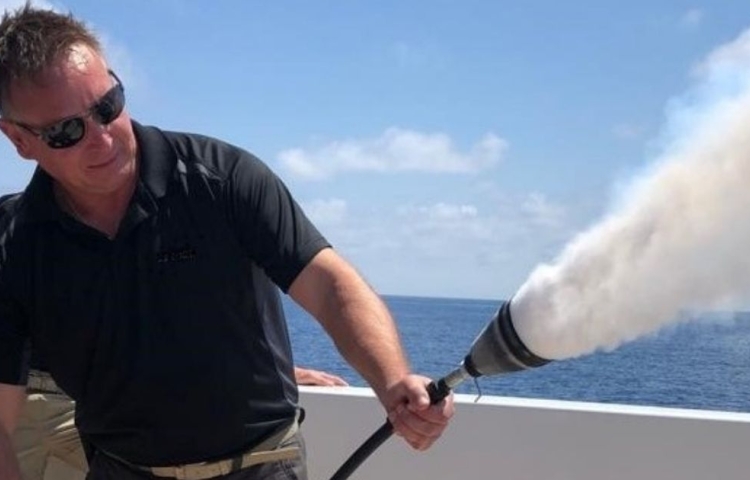 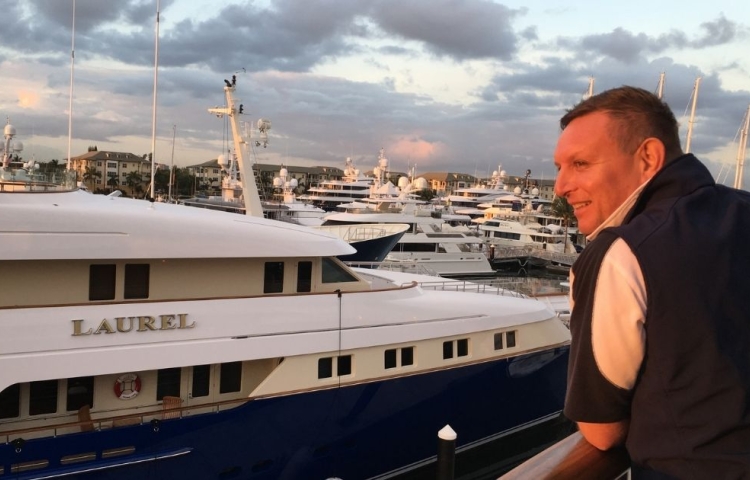 You have extensive experience captaining both charter and private yachts. As a captain, is there any difference?

We always give the same level of service and attention to the charter client and/or the owner. Depending on time and client preferences, charters are usually more active, visiting more destinations for local experiences. In comparison, owners usually like a more relaxed and flexible itinerary, spending more time in some locations than in others. However, it varies, particularly when you are faced with inclement weather.

How would you describe your style of captaincy? What type of captain are you?

I’m firm but fair. I employ an open-door policy, so any of the crew can approach me for whatever reason they deem fit. I’m always available to support the crew with either personal, family or professional matters.

Crew turnover is often high in the yachting industry – why do you think that is?

Personally, I haven’t experienced high crew turnover, but it does result in higher recruitment costs and it can affect morale on board. There is a multitude of reasons why crew leave yachts. Some don’t feel recognised, or they’re undervalued, or they get offered better packages usually with more leave/pay. Increasingly crew now leave for a rotational position with two month on/ two months off.

It’s important to make the crew feel valued, recognised and appreciated. Offering regular encouragement and support, while giving your knowledge freely, and also thanking them often. 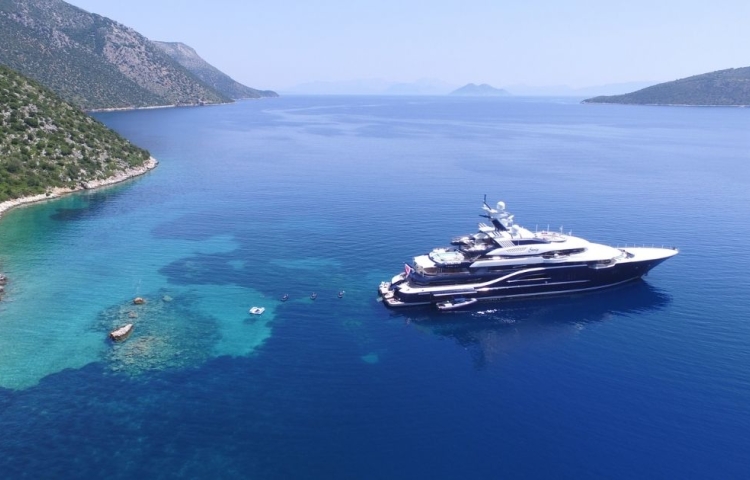 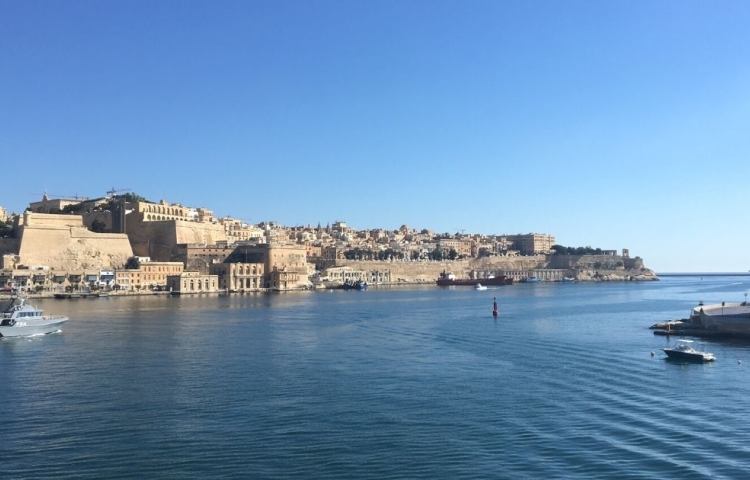 How do you develop your own leadership skills?

Like most captains, who would have taken the good they have seen from other captains and blended it with their own life experiences to create their own style. More recently, I have started a new journey to nurture my leadership skills through a ‘Command and Senior Leadership’ program developed by specialists in this field and presented on a platform with The Crew Academy. This hones your current leadership qualities and enhances your personal development for any future endeavours.

What trends are you seeing with charter guests? Where do they want to go and what types of experience are they looking for?

I haven’t seen any real trends, it’s still ‘across the board’. Some guests want unique experiences, for example, a picnic on the old lava fields of Mt Etna, while some guests love the allure of the French and Italian Rivieras. Others like historical locations. The beauty of it is that you could be seeing, or doing something new, anywhere. It’s always an adventure.

What changes you’ve seen in the yachting industry over the past 10 years?

Yachts are becoming increasingly larger and there are more of them. In terms of technology, we have better communication systems, better audio and visual experiences on board, apps for training and learning and the rise of social media. Crew are becoming more active with better diets and, most recently, there’s greater awareness around crew mental health in terms of training, recognition and the support available. 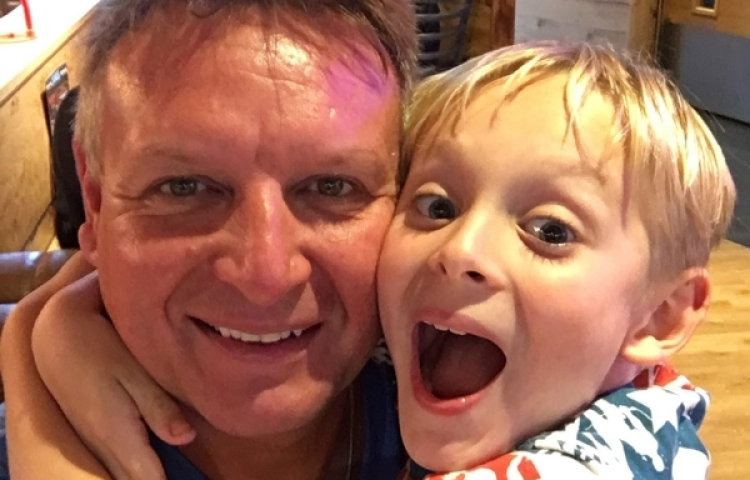 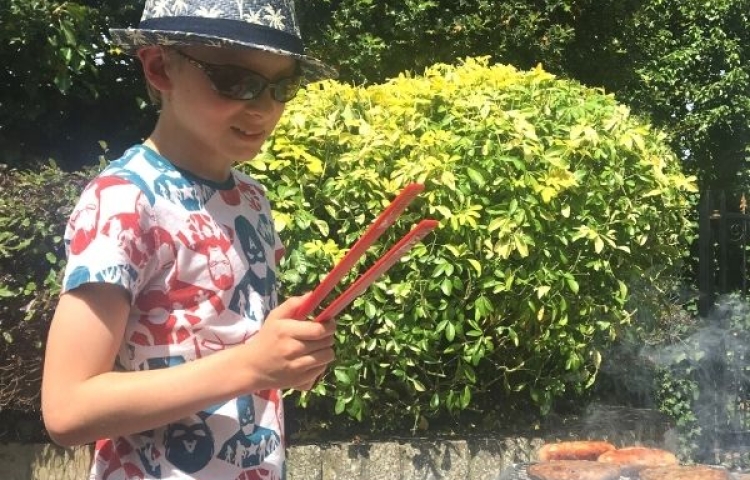 You mentioned a strong interest in history and especially maritime history. Can you share some stories with us?

The engineering marvels created out of necessity during conflicts have always interested me and many have evolved into the maritime sector. Today, lost ships are being unearthed and being brought back to life through digital mastery in documentaries, giving us fascinating insights into the past. Working on yachts has given me more of an appreciation of where the maritime language and traditions have come from.

I was fortunate to be working on the superyacht Octopus while the BBC were on board filming a documentary about HMS Ark Royal. The yacht was using its ROV (remotely operated vehicle) to film and document the aircraft carrier on the seafloor. On board, we had a handful of the last surviving crew and pilots being interviewed about their beloved carrier. It was an emotional time as they told stories of their time on board HMS Ark Royal and the final moments they last saw her afloat. Watching them viewing the footage live was an incredible experience.

One of the pilots landed the ROV on HMS Ark Royal’s flight deck, something he never thought would happen 60 years on. I was proud to be part of that experience and it’s one that I will never forget. God bless all who sailed upon her. 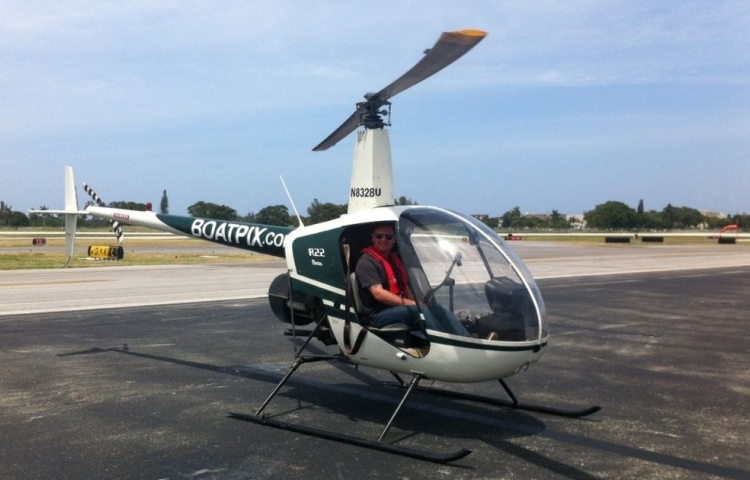 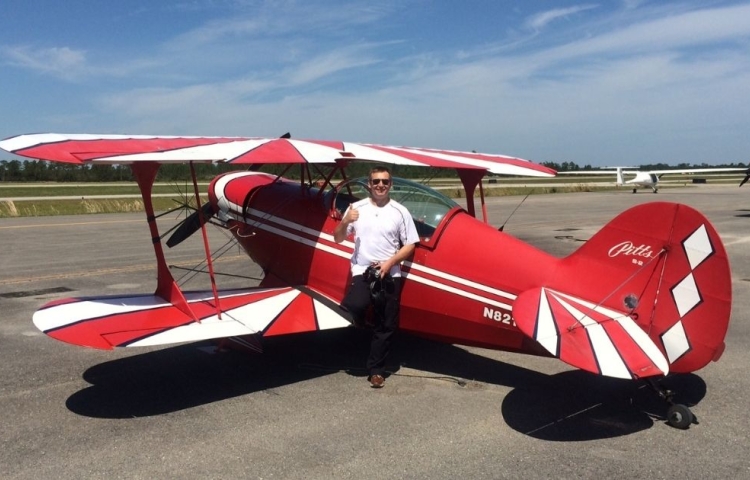 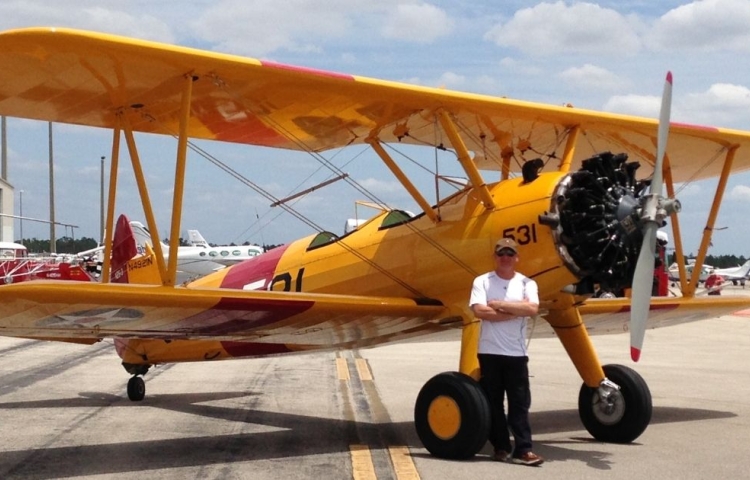 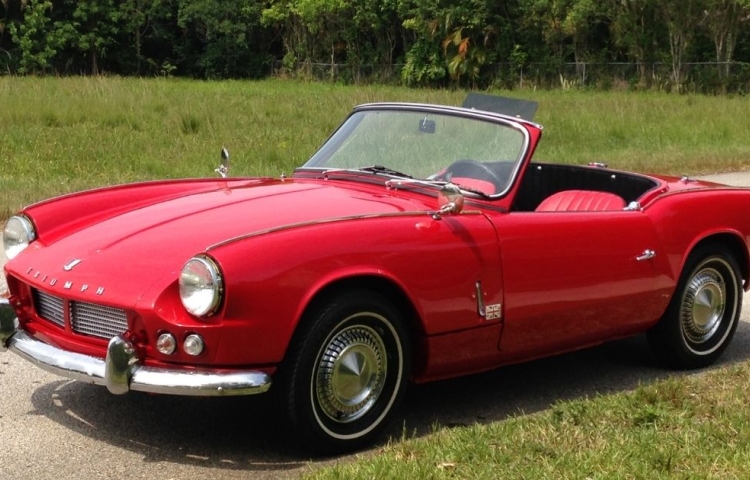 Some years ago, you took a two-year sabbatical to pursue some interesting pastimes – what did you get up to?

I took time out to be with my son and re-bond with him; being away for such long periods of time is difficult when you have children. It was great to have time just with him alone to reconnect. I also rebuilt two classic cars, an MGBGT and an original pre-mark Spitfire. They give you an immense sense of pleasure and achievement during the work and on completion.

I also started to learn to fly fixed-wing aircraft while building my various ratings of complex, high speed and upset recovery / aerobatic training. And I learned to fly a helicopter which was another personal challenge to achieve with the coordination it requires.

Which aircraft are your favourite to fly, and why?

I have done quite a lot of aerobatic training in the Slingsby T67 Firefly, Pitts S2A, Extra 200 and a Stearman PT-17 Biplane and have flown the Piper J3 Cub with floats. The smoothest aircraft I have flown thus far was the Pilatus PC-12NGX. I would like to fly a Saia Marchetti SF 260, a Pilatus PC-9 and a WW2 P-51 Mustang.

My ultimate fixed-wing goal is to fly a Spitfire - a classic warbird - and do some aerobatics in one of them. The helicopters I trained in were the Robinson R-22 and the Guimbal Cabri G2 with a view to flying the Airbus H130 T2.

If you weren’t a yacht captain, what would you be doing instead?

I would probably move into the new build sector and use the knowledge I’ve gained in the operational aspects of yachts, as well as during refits and yard times. With so many new yacht designs, and with newer and greener technology, it’s a new era that is very exciting.

With thanks to the team at: