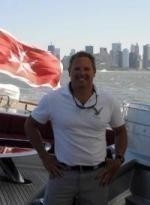 Not everyone who grows up in South Florida ends up the better for it. But Mike Wilson seems to be one of the few to have bucked that trend by taking advantage of the most visible industry in the region. No – not sales in bright neon beachwear. We’re talking about yachting.

The 35-year-old engineer grew up on the waters of Florida and later went to Purdue University in Indiana to earn a Bachelor’s degree in management. After graduating, Mike wanted to travel, but he also wanted to advance his career. He figured he could do both in yachting.

“I came in and I was young and I probably didn’t expect it would become a proper career,” he said. But it turned out that the industry was much more professional than he expected. “So that has been something very positive in my life. I never expected to travel and see as much as I have.”

He began his career as an engineer and mate on three small motoryachts in the Caribbean and South Florida between 2002 and 2007. He then worked freelance on M/Y Sacajawea, followed by the iconic S/Y Maltese Falcon, where he was promoted and worked as chief engineer until August 2011.

Now that he’s married and living in Pompano Beach, Mike is working as a broker and project manager with United Yacht Sales, as well as rotational chief on M/Y Senses.

As one of our resident writers in 'Engine Room', Mike took time out to answer our Q&A and, true to spirit, confesses, "I like moderation only if there is a whole lot of it!" The constant challenge of it, and that the engineering side of yachting is ever-changing. There is always the newest and latest and greatest that you are learning about and working with, especially doing project management and freelance work.

Attitudes and Ego. Both on crew and the ownership side! Engineers can be just as guilty as the captains. At the end of the day, I really wonder how people become as jaded as they are about self-identity. Bring it down a notch and quit acting like you are something special, because the chances are that you are not all that special if you are needing to act like it.

I am currently working more shore-based in the industry, doing project management and brokerage. I do feel that I could work most anywhere as well. Engineering will always be my skillset, so whether it's shore-based or not, I think I will be working with solving problems for people.

A terrific day at sea during a nice, smooth crossing. Four-on/eight-off, and in a nice rhythm. Calm seas, visiting on the bridge with good friends.

Unknown. Still prefer the water of the Exumas and South Pacific! Little Pipe Creek may be one of my favorite spots ever.

My home is Ft. Lauderdale. If not here, it will be in the mountains of the western U.S. somewhere. My wife and I really could move elsewhere one day – there is just so much to offer. There are the spontaneous things that happen. A late-night tender run with dolphins and phosphorescence, the unexpected great anchorage and crew party that ensues, being awed by your surroundings without expectation. Those are the times when we all realize “this is why I do this job”.

Dealing with spoiled owners who have no care or even basic thought about the work that their crew provide. Or a major mechanical failure that puts people at risk. Every engineer’s fear!

There is no such thing. Each boat has its issues in some way, and if I can continue to make it better in some way and bring it up, that is a great pleasure.

Difficult to say...have had nightmares and terrific guests from all sides of the gamut. I like moderation only if there is a whole lot of it!

Treat others as you want to be treated.

Acceptance into the U.S. Naval Academy.

I wouldn’t be where I am without a few moments of stupidity.