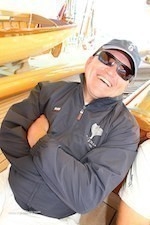 Mex has pretty much seen and done it all in yachting as well as the wider maritime industry. That’s why he’s known to most people simply as ‘Mex’. Over the years he’s served as a captain, a chief and sole engineer, a program manager, a bowman, and a crew boss, on everything from commercial fishing boats to square-riggers and modern superyachts.

In the end, however, he’d just as soon be known as a simple sailor.

Upon deciding that a life at sea – “between the blues of sky and sea” – was the one for him, Mex found the sexiest boat around and hung around until they gave him something to do. And he’s been doing something on boats ever since.

His passion for the pure joy of sailing is his driving force. He maintains an unflinching idealism and, being an old salt, there's a poet lurking somewhere, yearning for the days when sailors were sailors and the itinerary called for adventure.

In answering our Q&A, Mex reveals his views on the changes he's seen in the modern superyacht industry, a keen desire to drive standards, and... a simple wish to plant a tree and watch it grow.

Once I decided the ocean and sailing were to be my major endeavours, I found the biggest, sexiest boat, knocked on the hull for three consecutive mornings until I was told to keep quiet and go polish the brass … A solid topsail schooner, although my first job was aboard a steel hulled, Dutch-built ketch, the Tjaldor, based out of Young Island in the early 80s and run by Captain Dennis Forde of Mayreau.  I had, of course, been aboard commercial vessels before, including the lovely Rose and other trading schooners throughout the islands between engineering projects in the West Indies and South America.

NO.  It has become rather corporate, less passionate, and far too regulated.  Nice lifestyle, not much adventure.  Newbies are aboard for the money, rather than the passion or pleasure. Excelling at what I do, breathing deep, free and full.  The absolute responsibility and ability to assure excellence in operations and performance.  I love the fabulous improvements in technologies and, best of all, my mates.  I love my mates and the camaraderie developed for at sea. There is naught but truth.

The politics brought aboard by novices who chose the industry as some choose a job, rather than a lifestyle.

Likely the one you’re settled in securely when the weather rumbles by. Every day, those eternal moments of silence and serenity spent learning, filling my smile between the blues of sea and sky, sharing it all with good, solid souls.

Nothing, as it is what it is, other than approaching shore, which makes me twitchy.

The depths of one’s self reflected in the depths of the sea, the colour purple, and deep water just as clear as shallow. Truth.  Serenity of soul stems from clarity of thought, which stems from freedom from fears and the ability to see things for what they are, rather than what we wish them to be.

My mates, and other great people who do simple things with greatness.

I’m still here, still learning, from the past, from what’s next.

Regrets are like shadows, if you keep facing the light, they stay behind you … I want to plant a tree, and watch it grow, probably a palm tree, and let my kids discover the treasures between the blues of sea and sky.