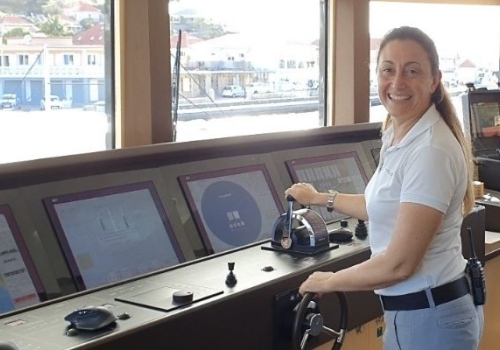 When it comes to working on board superyachts, it’s no secret that gender imbalance is rife. Yes, it’s common to see women in a range of stewardess or interior roles, but when it comes to the coveted job of captain, only 2% are female. While things are changing, progress is still slow, but Captain Maria Grazia ‘MG’ Franco is a stellar example of how hard work, talent, experience and perseverance can get you to the top. “I’ve had moments during my career where being a woman has been a disadvantage,” she says. “But no matter what, I would not use any of them as an excuse not to succeed.”

An inspiration to many, we speak to Captain Maria about her journey into the superyacht industry, the challenges she has faced, the incredible experiences she enjoyed during her six years on board the 126.2m private explorer yacht MY Octopus, and the changes she believes need to be made for a fairer, more equal future.

Can you tell us about your background and how you got into the industry? What was your first job?

I was born and bred in Rome, Italy, and my dad was a military officer so I spent the first years of my life in a military base. I started scuba diving when I was 16, and by 21 I was an instructor - I was studying Aeronautical Engineering at university but realized that what I really wanted to do was working on the ocean, being diving full time. After several years working at diving schools, including opening my own, and managing diving centres in Italy, I felt the need to explore further and moved to Australia in 1998.

Four days after arriving there, by accident I ended up working on a small boutique cruise ship, M/V Reef Endeavour, which was based out of Cairns, as the role of divemaster/deckhand. I spent three fantastic years on that vessel, building up on my experience and making lifetime friends. Working there made me realize that an entire new opportunity existed besides diving, and I embraced it fully.

Thanks to a friend that used to work on the cruise ship I interviewed for my very first yacht while living in Cairns, and got the job on the 49m Amels motor yacht Maupiti as third officer/divemaster. That’s how I discovered the superyacht world and became a part of it. 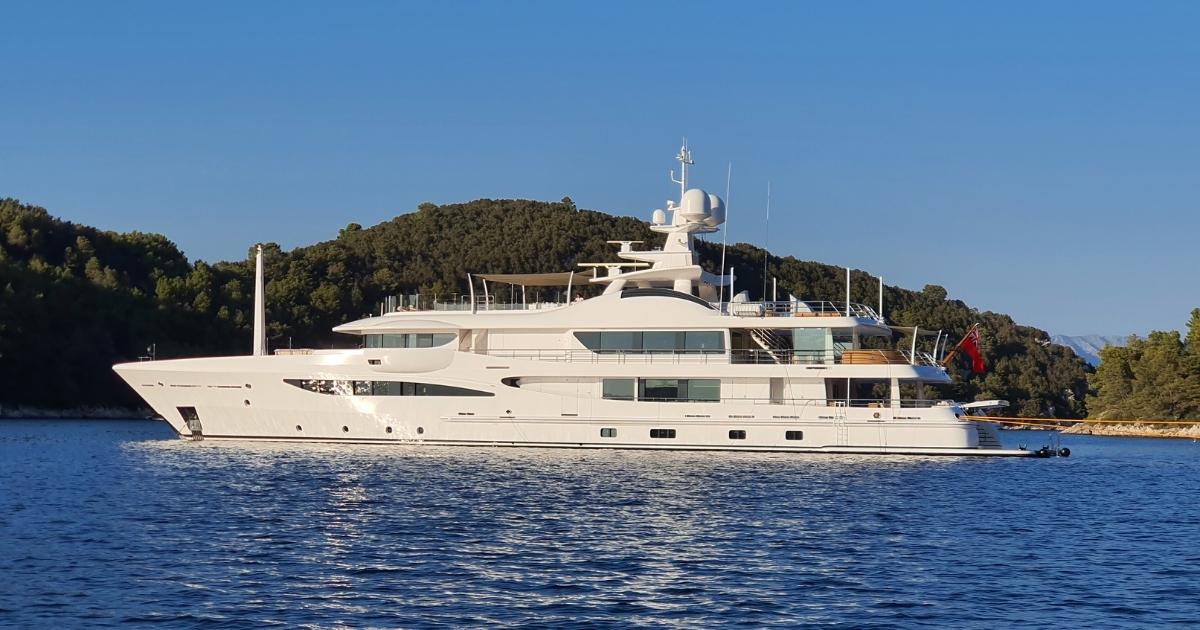 Have you always had a passion for the sea?

Always. I was a water baby and learned how to swim before walking properly - I was the one that parents have to come and pull out of the water when my lips turned blue and hands and toes where completely wrinkled.

What are some of the yachts you have worked on?

How have you managed to navigate the pandemic on board MY Halo? What were some of the challenges and how did you overcome them?

I was in St Barthélemy on Halo when the pandemic hit us - we had to leave the port of Gustavia and move to the anchorage for two months before being allowed back in. We ended up staying there until mid-June. Everything became more difficult, from provisioning to sourcing face masks and other medical supplies, to guest movements and keeping crew morale high. Crew rotations were put on hold for weeks and flying in crew was very challenging, and not even allowed until the end of May. It was certainly an unreal situation, but we’ve been supported efficiently by the owning company and we have managed to keep every crew member, even those that were at home for longer than originally planned. The logistic planning has changed considerably for the yachts since the start of the pandemic, and although the situation has improved, it is still challenging at times. 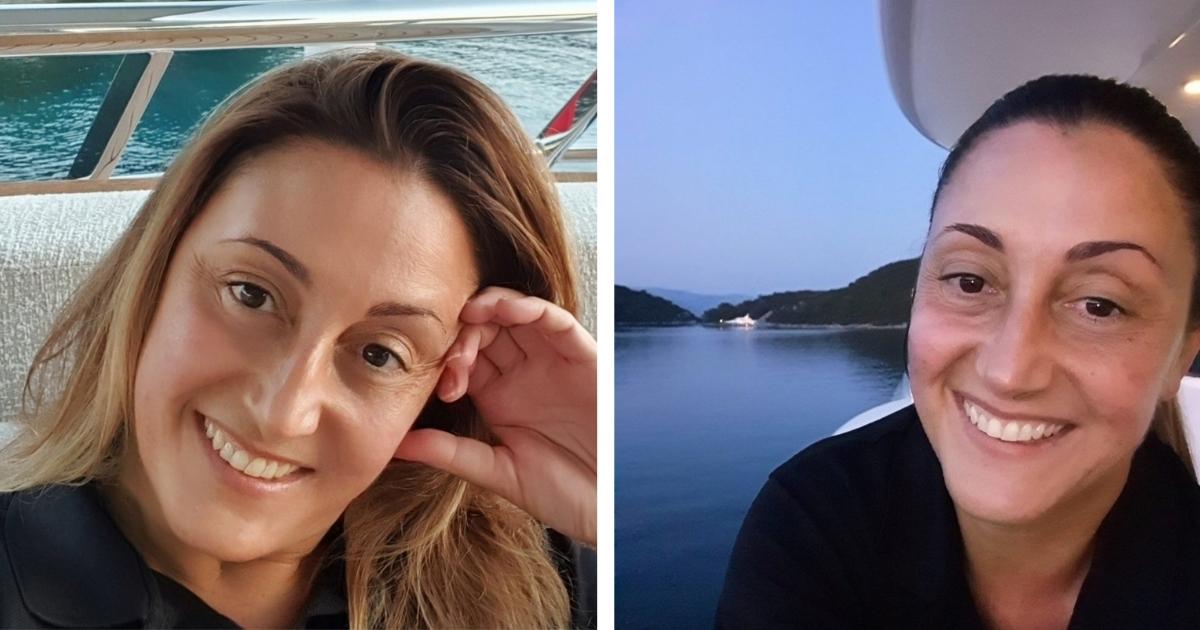 What do you love most about the job?

I love the ocean, and living and working on it is a dream come true. I still look at stunning sunrises and sunsets with the same eyes as when I was young. I never get tired of looking at dolphins or whales jumping out of the water in front of us, and I still dive with the same passion as when I started, whether it’s with large pelagics or tiny multicolor nudibranchs.

I also love travelling and discovering new places and new cultures, plus being able to share those experiences with our guests and making their time on board memorable.

I take pride in creating a nice working environment for the crew and presenting an impeccable yacht to our owner and guests. I like to think that I left every yacht that I’ve worked on better than when I joined it.

And what’s your least favourite thing?

Spending long time away from my family, friends and dogs. And not having enough time to enjoy my favourite sport and passions, like skydiving or going to the stadium to watch Juventus play.

What do you think of the term ‘female captain’?

The day the distinction would be no longer necessary we would have finally reached gender equality. 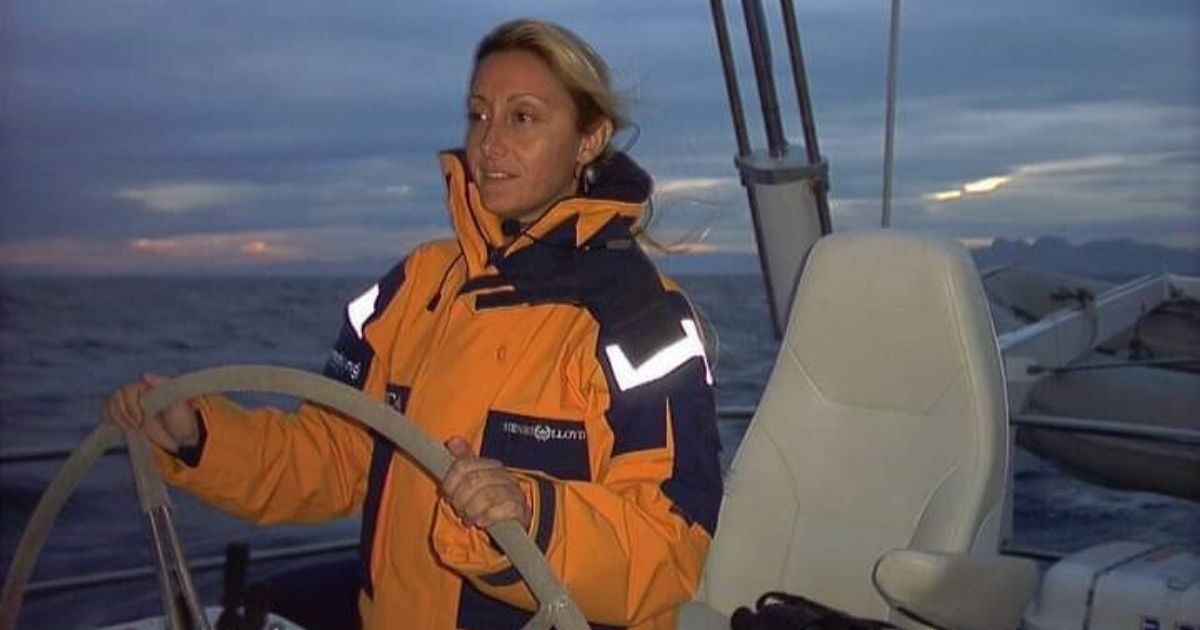 Do you think we are seeing a change in the industry, with more women interested in taking up the role of captain?

We have a growing number of females working on deck compared to in the past, although there are still not enough women in command position, considering that approximately only 2% of captains are female. The industry is certainly paying more attention to women and hopefully we are setting a good example to follow for the younger generations.

What do you think needs to change to ensure we see more women taking up the role in the future?

All women need is to be given the same opportunities as men. We don’t need special privileges, we need to earn it the same as everyone else, but at the same time we don’t need to be better than a man to deserve a chance.

Another aspect is balancing career with personal life, which could be a reason not to approach this type of career. Having children in a full-time position is very difficult, and in my opinion almost impossible, without a proper family support. So rotational positions would also make the job more attractive for women that may still want to raise a family.

Have you encountered many hurdles in your career due to your sex?

I’ve had moments during my career where being a woman has been a disadvantage. For example, I’ve applied, over the years, for several jobs that turned out were only considering male candidates. Truth is that to be considered and respected you have to be better than a man, and to reach certain positions it may take longer than it would if you were male. For a woman in senior or command position, being average is not tolerated, but it is, without offense for anyone, if you are a man. But no matter what, I would not use any of that as an excuse not to succeed. 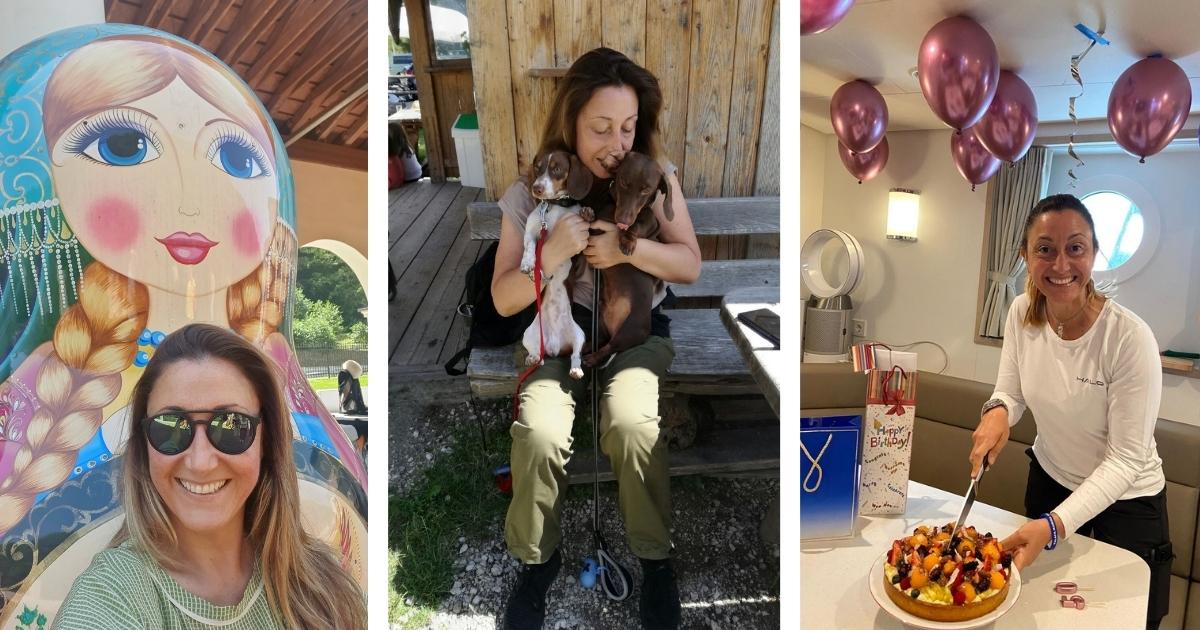 How would you describe your leadership style?

I’m a strong-minded person with a soft heart. I’m demanding but generous, strict but fair, and with my office door always open. I have a very strong work ethic and I like to instill the same in my crew, and I do that leading by example. I don’t micromanage crew and I like for them, especially heads of departments, to take initiative to encourage positive work conditions and enthusiasm.

What’s the most important lesson you’ve learnt in your career so far?

That every day is a learning day.

What trends are you seeing with charter guests? Where do they want to go and what sort of experiences are they looking for?

It’s hard to generalise on this, but with my previous experience on charter yachts, charter guests like to be presented with suggestions of new locations, or if not new places at least being able to see them from a different prospective. I’ve always tried to tailor each itinerary to my guests’ preferences while ensuring they have authentic experiences at the locations we visit. This allows them to understand more deeply the beauty, the culture, the food, the people, and discover the real soul of each place.

You’ve been involved in a number of new-builds – are there many advantages to leading a vessel from the beginning?

It’s very exciting to be part of the beginning of a new yacht - to be able to start with a clean canvas, to set her up and shape her to the owner’s needs and expectations, and make her as practical as possible for the crew that are going to run her. 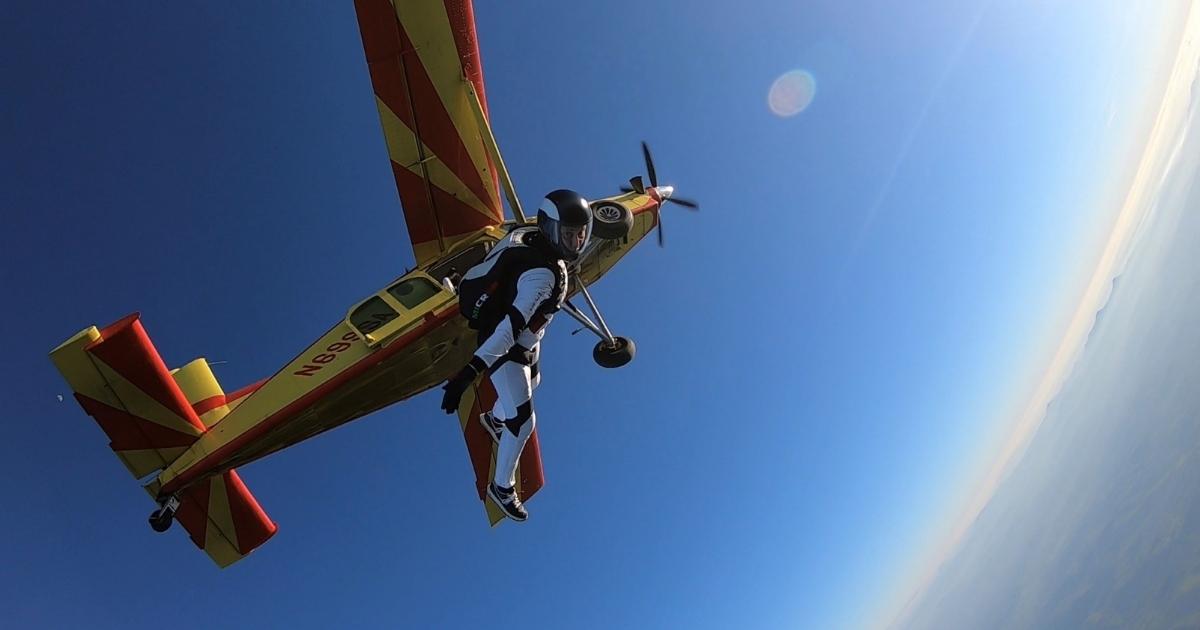 You spent six years on board the 126.2m private explorer yacht MY Octopus – can you share some stories with us?

If I have to describe my time on Octopus what comes to mind is the Eurythmics lyrics: “Sweet dreams are made of this…. I travelled the world and the seven seas...”

How long do I have to start explaining what those six years meant for my career and my personal experience? First of all, let me tell you what a privilege it was working and sharing amazing moments with Paul G. Allen. He was a visionary, and such a generous and kind soul. The world is a lesser place without him.

I’ve explored sunken and unseen wrecks; I’ve dived in a submarine to 350m below the surface; I’ve travelled to Antarctica and flown in a helicopter to the top of glaciers; I’ve dived with schooling hammerheads and whale sharks; I’ve witnessed the making on the recording studio of the SuperHeavy album by the one-off supergroup project consisting of Mick Jagger, Joss Stone, Dave Stewart, A.R. Rahman and Damian Marley; I’ve planned large events for Venice Art Biennale and Film Festival and took part to Olympic Games in Athens and Turin; I met billionaires, Hollywood stars and rock stars; I worked hard, played hard and learnt a lot - I simply had the time of my life!

Tell us a lesser known fact about yourself that would surprise your colleagues.

My very first job was a piano teacher. I started playing piano when I was five years old, and by 14 years old I started teaching to kids, and later achieved a diploma from Conservatory of Music. But being a professional pianist was not the life I would seeing myself in. The job gave me independence at an early age, and with it I’ve cultivated all my sports and passions without having to ask my parent’s help. 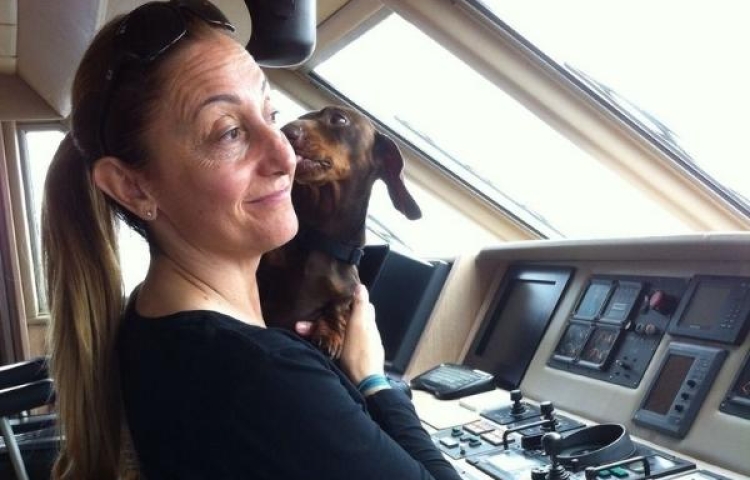 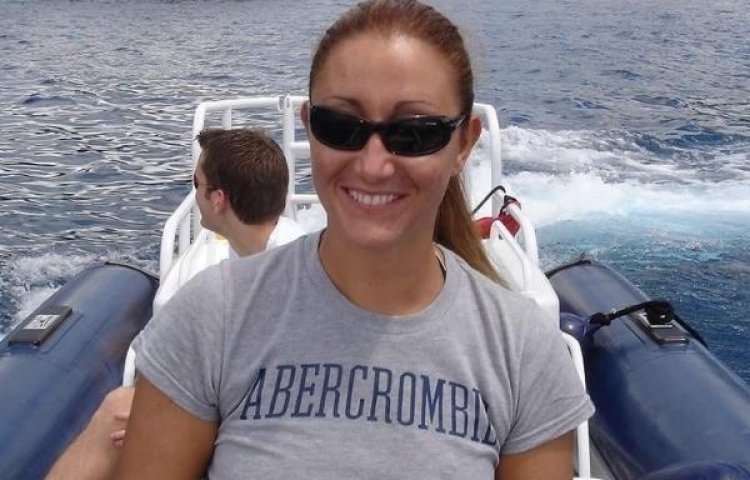 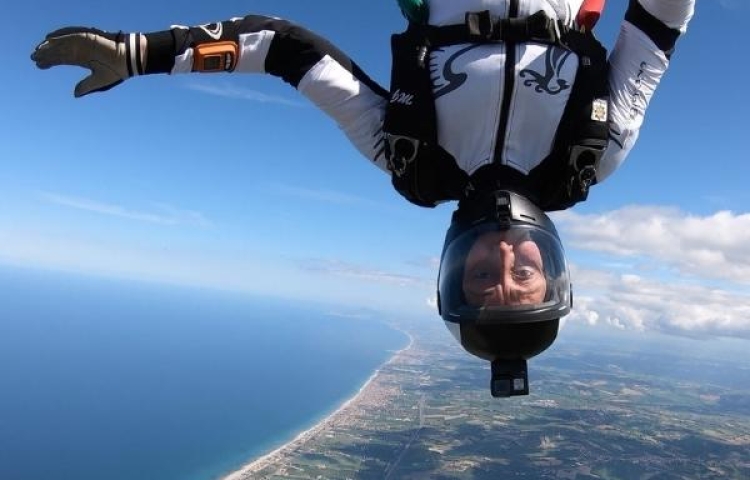 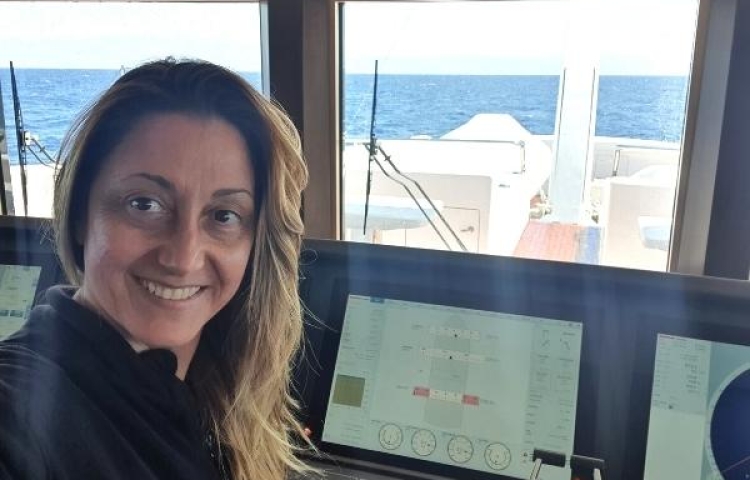 What are your favourite cruising grounds and why?

I love the Med for being able to experience amazing historical coastal villages, the rich and diverse culture, thousands of gorgeous wild islands, the unmatched cuisine, the fashion, the glamour and fun, as well as the secluded privacy, all in one single region.

Equally I love the South Pacific for the untouched naturally beauties, the spectacularly rich and vibrant reefs and underwater life, the turquoise lagoons and the powdery beaches.

What one lesson would you give a female crew member looking to rise up the ranks and make it as a captain on a large yacht?

Develop a strong work ethic and skills through training and hard work, without rushing through the steps of the career ladder, taking time to build up the experience on every position and embrace every opportunity for growth. Don’t let anyone else decide what your future is going to be, get up after every fall and believe in yourself and your dreams. Success is achieved with perseverance.