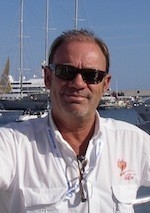 Captain Pascal Pellat-Finet grew up on the crystalline waters of southern France. It was in Toulon that he started sailing at age 8. His passion only grew with age. Racing became his life. It began in the familiar waters of the Mediterranean where he was involved in the construction of the first Maxi in the Med, S/Y Halisara, and learned from the likes of Dennis Conner and Gary Jobson, to of America’s most celebrated competitive sailors, with five America’s Cup wins between them. And then it took him around the world. He hitchhiked across the Atlantic and began sailing in Florida with the American professional circuit around 1980. Two years later, he was in Newport, Rhode Island, sailing for the America’s Cup – and not long after that, training for the America’s Cup with the well-known New Zealand sailor Chris Dickson in Perth, Australia.

He hasn’t quite lost the racing bug – he still races smaller boats in his free time – but has instead transferred that passion into trying to run the best sailing yacht around. He was involved in the design and construction of S/Y Tiara, the 54m (178-ft) sloop he has captained since it was built by New Zealand-based Alloy Yachts in 2004. As he fondly puts it: “I was with her when she was born.”

Captain Pascal, now 52, lives in the port in Antibes, where he passes much of his time when not at sea, enjoying the company of his companion and two kids – ages 22 and 14. OnboardOnline sat down with him on Tiara’s bow recently at the Monaco Yacht Show to discuss changes in the industry, the economic malaise, and the future of luxury yachting. OnboardOnline: You came up through the ranks of the competitive racing circuit – do you miss the competition?

Pascal Pellat-Finet: “Yes and no. Yes, of course, because it’s terribly exciting. And no, because I transfer my desire and competition into my business of today, which is to try to be the best at what we do. The desire of winning is transferred to just to try to run a good boat with a good crew and to try to make people happy with the tools I got.”

OO: The competition is still pretty tough in the superyacht market, especially with the economic crunch. What does that mean for the future?

PPF: “Well, I think the best will stay. And by best, I mean the best-managed boats. We are in a crisis situation and we have to manage our budget more carefully – provide more bang for your buck, as they say. Obviously, the owner watches the money more carefully, and we have to be the same way. Some of us will disappear and some of us will stay. Now, we have to be extremely conscious of how we run our boat, economically speaking.”

OO:What does that mean for your job?

PPF: “It will continue. It will continue, because there’s nothing wrong with running a smart boat. We had a couple years where a lot of people were involved in our business without much training – I’m talking about technically and economically. Obviously, that’s stopped and we have to get back to smart management.”

OO: Your experience in boating is so broad – do you see that same level of knowledge and experience in the crew coming into the industry today?

PPF: “No – no, it’s quite different. If I say so, in my generation, we started with passion – with sailing passion. We would go out there and we started and we were not paid. We were not paid when we sailed on the boat. We were only paid when we worked on the boat. That was the basic deal in the eighties. And some of the owners that I met and I worked for were very smart businessmen, who at the same time we were running their boat, they teach us a lot about business, which today pays off. But now, back to your question, I see less passion and more kind of – they want to be in this business because it’s all shiny, if you see my point. They see the bright side of the thing and it’s missing some of the passion we had before.”

OO: In your opinion, how do you get that back – if it’s even possible?

PPF: “Well, I don’t know that we get that back. Now, you know, people have to become more professional. And the attitude – it’s not only because of the travel, the easy money and the drinks on the shore. They have to run their life in this business as a business – whatever level they are. The lack of passion doesn’t matter. I’m looking for professionalism. But for me, personally, I like to see at least a spark.”

OO: Right now, if you could change one aspect of the industry, what would it be?

PPF: “I can answer that very well. I think the industry has to be more professional. We are professional, but we have to become more professional. Which means: We’re using a fantastic boat, a very expensive boat, at the expense of the crew. So, what I’d like to see – and I’m not complaining about my boat, because we have a fantastic boat with rotation. But the boats need to be used and the owner wants to use them. The only weak link in this fold is the crew. So, if we establish rotation for crew aboard yachts, it’s the answer of many owners’ problem with crew.”

PPF: “Yes. You work for two months and you’re at home two months. And some people like us are willing to be reasonable on the money-side, but that gives us a life. At the moment, the general feeling is – and I’m not talking about my boat – but the general feeling is: I’ve got a boat, they should be proud to work on my boat. Then they work them 24-hours, seven, for like 6-7 months, and afterward they’re absolutely tired, they fire them and then they get a new crew. So, that’s the bad side of our business.” OO: Do you think that will actually happen?

PPF: “I do think it will happen. Because good owners want good crew. And there needs to be a balance between private life and professional life. And we want this to be more than a 21st century slavery business.”

OO: How much do you, personally, follow the economy?

PPF: “Oh – we have to follow it. We have to, because that dictates our directions – how much we are going to spend in the shipyard, how much we should…you know, running this boat is, more or less, two or three years’ planning.”

OO: What markets do you think have potential for growth?

PPF: “For two or three years now, we’ve seen some big interest in Eastern Europe – Bulgaria, Russia and so on – which are showing more interest in yachting. I think it’s more into their thinking than the Asian market. Obviously, the Asian market will come in time. But we don’t know in which capacity.”

OO: What do you think would have happened if the Russians and Eastern Europeans hadn’t stepped in during the economic crisis?

OO: You’ve always sailed. Would you ever work on a motoryacht?

PPF: “Personally – not. But there are so many competent people in motoryachts, and I don’t want to disturb that.”

OO: That’s a very diplomatic response. You’ve been asked that before.

PPF: “Yes. So, I’ll keep sailing. I’m in a niche market and I got a chance to be educated in sailing. I will always have my love of sailing and transfer my love to anyone who comes on this boat. I’ll be happy to show what sailing’s all about. On a powerboat, I would probably have less enthusiasm.”

OO: How do you accommodate over-expectations of clients?

PPF: “Well, the issue is attitude. Your attitude in trying to please the people who are owning or chartering a boat like this. They have a big expectation. Some stuff is possible, and some is totally impossible. But if you, with your crew, are having a very decent attitude and at least try to get the most of their request, at least that’s a very good way to succeed.”

OO: What’s the strangest question a client has asked you?

PPF: “There have been so many. How about: ‘How come it’s raining, captain?’ That was a funny one. But at some point, they don’t become anymore strange. You get used to it.”

OO: Do you still like to be around the sea when you’re on vacation?

PPF: “Absolutely – I live in the port in Antibes. But I like to go to the mountains. It’s good for reflection.”

You can watch SY Tiara in action here: