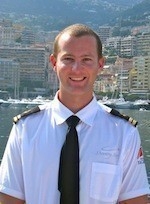 Brandon Matley, 25, left his hometown of Cape Town, South Africa, in May of 2011 and moved to Antibes. Trained as an engineer, his was “the usual story,” he said. “I heard about the industry through some people I knew that were yachties and moved to Antibes.” After a lot of dockwalking, he eventually landed his current position: second engineer on M/Y Shooting Star. He has been with that yacht for a year and a half and recently took some time to answer some of our questions, revealing a preference for Hemingway, Tom Petty and Germans.

What is the best part of your job?

From an engineering side, I think it’s great how broad the experience is…Dealing with so many different systems with a hands-on approach and often having to push yourself to solve issues on your own or with limited resources. Apart from that, it’s just great to be able to see some amazing places and meet some great people all around the world.

What is the worst part of your job?

Cruising from Porto Cervo to St.-Tropez in five hours, no guests, on a Med as flat as a mirror dong 48 knots and stopping halfway for a quick wakeboard behind the yacht. (That actually happened.)

I’ve never been to the BVIs but they look nice…I would just kiteboard clear Caribbean waters for the rest of my life.

Going on a Jetlev jetpack at the Miami Boat Show.

I don’t want to talk about it.

How unpredictable it can be.

What is your idea of the perfect job?

2/2 Rotation – I think that’s my goal for the near future.

Generally speaking, which nationalities tend to be the best clients?

I love the story of The Old Man and the Sea…I think anyone can relate to that story…not just mariners.

Who is the best poet to write about the sea?

What is the best movie about the sea?

“If you never slow down, you never grow old.” – Tom Petty.

If I died kiteboarding, surfing or snowboarding, I would be content.

Working as an engineer in South Africa…and probably not in a very exciting part of South Africa.