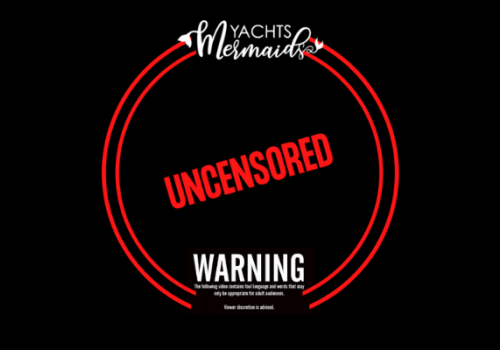 A show designed to tackle the tougher, less aired issues that many crew face while working on board superyachts, UNCENSORED with Marien Sarriera takes an honest, hard-hitting look at topics from work harassment and sexual abuse to mental health, substance abuse and more.

Broadcast regularly on Yachting International Radio, UNCENSORED is a product of Yachts Mermaids - a platform which provides resources, tools and support for female crew while working to change the paradigm and encourage more women in yachting to create sustainable careers and a healthy work/life balance at sea and beyond.

Substance Abuse, Suicide and Mental Health On Board

Whatever your job or personal situation, managing mental health can be extremely tough at the best of times. In the yachting industry, surrounded by those with an old school mentality where crew are often told to just toughed up or quit, it’s even harder. Couple this with an extended time out at sea and a work-hard-play-hard atmosphere, substance abuse is rife, and distress and depression are more prevalent than ever.

In this episode of UNCENSORED, Marien discusses these issues with Angela Wallace of The Purser Trainer, diving deep into the fact there is no support system or HR department implemented for crew, especially when working under a non-commercial license vessel, and what can be done to change this.

Going a long period of time without any sexual activity is a reality every yachtie has encountered at one point or another while living and working on board. In this episode, Marien and friend Isabel discuss a number of funny, light-hearted memoirs along with some sound advice for when the inevitable happens.

Facing Your Expiry Date at Sea

Working aboard a superyacht ultimately has an expiry date, and it's hard to forsee how challenging it can be for crew when this time comes.

Marien is joined by former bosum Anna Petchell who now works as an exit strategist coach to discuss the practical exit tools available to all crew, no matter where you are in your career path.

Perfect Body On Board

In an industry where it's believed that a perfect body image is a pre-requisite for success, especially among female crew, the pressure to look perfect can have an extremely negative effect on mental health.

Former chief stew-turned-self love and transformational coach shares her experiences in the industry and the real story behind it all.

The world of superyachts can often leave people in murky waters, so knowing your rights on board is essential, not just for your safety but for your wellbeing, too.

In this two-part episode, Marien and former purser Sandra Jordan, creator of @theyachtpurser, uncover the reality that all yachties are facing on board and the issues that arise due to the fact they are classified as seafarers, even though they have different rights than others like cruise ships and commercial crew.

While people being unfaithful on their partners isn't exactly a rare occurance, in the superyacht world it seems to be the daily bread of many.

Marien talks to Belle, a former yachtie and now Transformational Coach at Belle Esprit, to discuss the possible reasons behind this, with Belle herself sharing a raw and honest account of her experiences as a victim and perpetrator of unfaithful relationships. You may even learn why you ended up in an unfaithful relationship in the first place, if that is the case.

From lack of control many crew face on board, including with alcohol and spending, to the harsh unexpected realities of working with billionaires, there are a number of blinders that green crew can face when joining the industry of glorious white boats.

Marien is joined by Mickey, a yacht stewardess, to discuss the lack of control that many crew face in this situation, how bad habits are often really a coping mechanism for something deeper they are suffering inside themselves, and the lack of support from HOD for crew to feel safe and supported when talking about their mental health.

Living and working on board a superyacht can take a toll on physical health, with very little time to exercise or often even sleep.

Marien speaks to former deckhand/stew and full time personal trainer Shelby Hall, who shares the importance of taking care of our health in order to create that change we all desire and how to hold ourselves accountable in order to succeed. This is necessary because while many of us want to live a more positive lifestyle, we don’t take the actions that are required to make that happen.