Crew Life » Crew Departments » Captain » If You Drive the Yacht, What Drives You?
« BACK

If You Drive the Yacht, What Drives You? 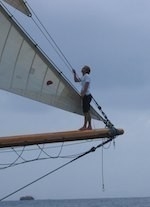 What drives you can be the route to success, and there are many ways to gauge that success. Sure, money is one of them. So is position, size, program, type of yacht. But for the yacht crew I’ve known to be the happiest, the greatest measure of success in my own humble opinion, is that they have managed to find the job that suited them. In rare cases it has happened by accident. But for the vast majority it was reached with either determination to an end goal they sought out and put themselves in a position to be considered for; or it was by trial and error – and as much was learned about themselves by doing the jobs they didn’t like as was garnered from the ones they did.

I literally grew up on and around boats. From my birth in the Caribbean, our home was not on a large yacht but a little 45-foot 1905 yawl. In the 80s, I was one of many kids who grew up like this, just like my older siblings and many of their friends. I loved boats because my father instilled it in me, because I liked the freedom sailing my dinghy gave me, and because when I got older I liked racing, and it clicked with my competitive spirit. It happened for me just like it did for so many others who, while maybe they didn’t grow up on a boat, spent their youth around yacht clubs and small sailing clubs, racing dinghy’s and often graduating to small keelboat. For me it was dragons, and I was lucky. So were so many others that are in this industry. In various ways, whether it was from youth or much later in life, some great sailors I know didn’t hop into a boat till they were 18 or maybe later. Well, neither did Irvine Johnson, and he’s a sailing legend. You don’t need to be born to it. Where your passion drives you and you have an aptitude, you are bound to be good at what you do – especially if you work at it. There are many who fall into this category. They got into the industry because, quite simply, like Rat in “The Wind in the Willows”, they just like boats. That’s what hooked them. Not money. Because for many there wasn’t that much in it anyway when they started all those years ago. Those who started on classics know there was never much to gain financially. And for those currently on classics, there still isn’t. It’s the low salary side of the industry – but it’s also one of the happiest sides. But my fondest memories involve two boats: one that was a gaff schooner and the other a gaff cutter. And as much as it was the boats themselves I loved, it was also the crew around me. And not just on your own boat. At regattas, those you competed against, their passion, how you would appreciate each other’s boats after racing, rather than criticize – it all still stands out in my mind today in stark contrast to what I see and hear about now.

The attitude that I attribute above was often passed down to those who got in the industry many years ago and are captains now. Still great ones exist, no doubt. Many came from a legendary school of big boat captains who passed on skill, but also had an air of showmanship. They were captains who inspired their crew by teaching them skills, but also appreciating that it was not money, but a desire to sail magnificent vessels that few would ever get a chance to step aboard. They knew being on delivery with a stiff breeze was a time to put sails up. Why? Because if you sail, your crew get better.  When time comes that the owner gets aboard and wants to go for a sail himself, he gets a better ride. His crew know their boat, and it’s safer. They are practiced. And when time comes back on delivery and that foul weather hits, the captain and crew know what to do. Even good seamen get rusty if they do not have to do the job of sailing. And motoring around with sail down all the time has knock-on effects that are not often fully appreciated.

But it wasn’t just that. Sailors are romantics by nature – though not necessarily with women (sure we like ‘em; we just fall down on the flowers and chocolate side of things, or remembering their birthdays….or names). All joking aside, a captain who was a showman gave his crew that excitement and confidence and love of yachting that drove them to be better, to have a marker to aspire to.

I remember hearing about a big Wednesday back in the height of the Nioularge early 90s, St.-Tropez, big breeze, and legendary captain John Bardon sailing full chat – all sails up on a 60m black three-masted schooner in her modern heyday. Spectators lined the wall as she hurtled towards them like a locomotive, pure power. She came so close, Bardon showing off his well-trained crew, that spectators evacuated the breakwater. Then he rounded her up, tacked over – no mean feat with the amount of sails and runners to deal with on this kind of rig and in that kind of breeze. You can forget your hydraulics and captive winches and all the other equipment that has removed crew from the art of line handling. You show that confidence as a captain and faith in your crew, and you will be loved. That’s why Bardon, Paul Goss, Steve O’Keefe, Joel Dressel and others are talked about by their ex-crew in revered tones. Memories of sailing on and off the anchor. Many of those ex-crew of theirs are captains today. It wasn’t money; it was the men and the boats themselves that attracted those crew.

Today, for many that is lost. It’s salary size, Internet on board, crew accommodation, cabin size, and charter tips. That group, larger than it ever was, and growing, is behind something else. The days of camaraderie around the marinas and boatyards has all but disappeared in the Med. It somehow manages to still survive in parts of the Caribbean, and at smaller marinas in the States and around the Pacific. They criticise each other’s boats, sneer at those on lower salaries as somehow stupid for working for so little, although that crewmember may be learning more, and have a better all-round attitude. Sometimes a crewmember can find himself or herself on a boat they never thought they would work on due to circumstances of life that pushed them that way. I once worked as mate on a motor yacht, for two years. A lifetime of sailing yachts, both classic and modern, was unfortunately curtailed because I believed that I needed my winters based in one place for personal reasons that I don’t need to go into here. But over time, a sort of misery descended, because there was no more sorting out a problem on the foredeck in big sea on delivery, no satisfaction at the end of the day having watched the owner smile at a great days sailing – exactly what he had envisioned when he had commissioned his windblown thoroughbred.

It was waiting. Delivery was a warm bridge, and watching a radar, adjusting the course of the auto pilot when necessary. No more feeling the boat underneath you through the helm on a night passage and a following sea. It was soul-destroying. It made me think of those jokes about “selling your soul when you went to the dark side”. So eventually I left to captain a 30m carbon sailing yacht. She required a lot of work. We sailed constantly. My crew and I worked like dogs again. And with every difficulty we crossed, it was just another challenge and we loved it. I had a crew that were as keen as I was to set canvas on delivery. And at the end of a day when boss was on board, I felt again that satisfaction. Even though we were tired and running around, giving him the thrill he had bought the boat for was worth it. When I think of the happy crew I know, some are journeymen, experienced sailors always on delivery or racing, and happy in the single life they chose. Some are on a boat they love permanently that is busy in the summer, but gives them time in the winter to spend with their loved ones. Some are on permanently on a boat that is never off season. But what is common, is they enjoy their job, and it’s not money they talk about if you ask why. It’s often a benefit that a good owner has seen in how lucky they are to have crew that love their boat so. That they give it the best care for the right reasons – and a smart owner knows he benefits from that, and pays them for it (even if, unfortunately, they often don’t…see classics). Those people are the great crew. And it comes down to why they chose to do it. It shows in their attitude, and the way they act on or off the boat. Two seasons and an aptitude for course work, and a hunger for fast money isn’t where the greats come from. As with anything: nothing worth having comes easy – not in yachting and not in life.

Captain Ted grew up in the Caribbean on his father's 45-foot enginless yawl, Iolaire, which was built in 1905. His father, Donald M. Street Jr., has written well-known cruising guides for the Caribbean. He began in a hanging basket from the deckhead on Iolaire, and he began racing on the family dragon at age three. He has lived and sailed on boats his entire life. He began crewing superyachts as a career at the age of 19, and worked his way up from deckhand to captain over 13 years of uninterrupted racing, ocean-crossings and cruising. He has worked on both modern and classic yachts, from 24m to 64m, and most every type of rig in circulation. From the Atlantic basin to the Pacific basin, he has sailed somewhere close to 100,000nm.